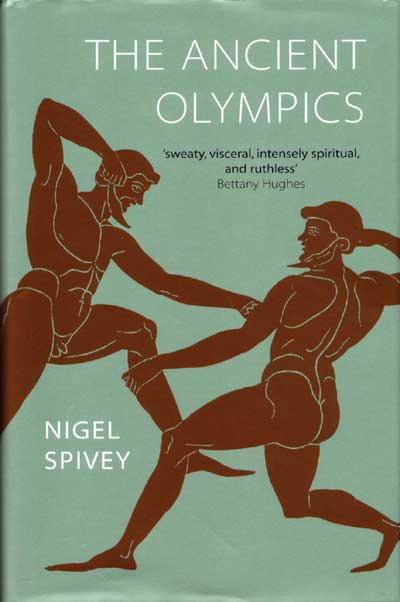 In the Greek hoplite army, every citizen was expected to be a soldier; your national service lasted for life and thus it became your civic duty to keep fit. From this sprang the Greek obsession with the body beautiful. There was no point in having a beautiful mind if you did not have a beautiful body to go with it. Thus places sprang up where it was possible to keep fit. They were called gymnasia; the name survives today though without the overtones, for gymnasia comes from gymnos, meaning nude, so that gymnasia should perhaps be translated as nuditoria. Why keep fit if you cannot show off your beautiful body? It was only with the coming of the Romans that hot baths were added and eventually dominated the complexes and the whole concept became somewhat more relaxed.
In The Ancient Olympics (Oxford, £16.99) Nigel Spivey who lectures in Classical art and archaeology at Cambridge, begins by putting the Olympics into context, as part of the Greeks’ overall belief that that you must train to achieve ‘beautiful goodness’. But training leads to competitions, and by the end of the 6th century BC, a calendar of competitive meetings was firmly established in the Greek-speaking world. Foremost among them was that at Olympia: but why Olympia?
There were numerous other games in the Greek world, notably at Athens, but for 1300 years beginning in 732 BC and continuing until they were closed down by the Christians, the Olympic games were the best. At first they were essentially local, but by studying the lists of the victors and their home towns we can track the course of the Olympics. The expansion begins sometime after 732 BC, when Athenian names begin to appear; then in the 6th century BC it suddenly opens up, and participants come from the Greek settlements overseas, in Sicily and Italy and from Asia Minor and around the Black Sea. Many of them constructed treasuries at Olympia which became the link with their old homelands. Following the conquests of Alexander, there is an emphasis on the eastern empire which is consolidated even further in the 2nd century AD, when the Roman influence finally engulfed the games and they became properly organised.
He describes the games themselves as a ‘programme of agony’ – a nice pun, because ‘agon’ in Greek means games, and the games are agony. You arrive a month beforehand, undergo the official scrutiny, and prepare for the games themselves: the chariot racing, the pentathlon, the foot races, the heavy contests of boxing and wrestling, and finally the race in armour: all interspersed with sacred rites and processions, and concluding with the grand banquet. The most important of all was the pentathlon, the five sports of running, jumping, discus throwing, javelin throwing and finally wrestling.
The publicity for the book rather concentrates on the fact that the Olympics were all about winning; this is indeed true – there were no prizes for coming second, as there were at the Panathenaic games. But the award for winning was a simple crown of olive leaves – laurels were awarded at Delphi – though the real rewards came at home, where the winners were often given gifts of amphorae of olive oil, or free attendance at the theatre for life. In practice, the best rewards were more elusive: the best of all was to have an ode written in your honour by one of the top ode-writers, preferably Pindar (and it was the ode-writers who really clocked up the money); or you could have your statue made – there was a big business in making statues of victors. Be careful, though: fines were levied on those who cheated or offered bribes, and the money was used to set up statues to Zanes (a sort of anti-Zeus): no less than 16 statue bases have been found at Olympia.
Nigel Spivey is essentially a classicist who concentrates on the written word, notably Pausanius and his guide book to the Greek world, and the numerous inscriptions. He then looks to mythology which he is always keen to interpret, and only after that does he come to the archaeological remains. However, as a classicist he is spared from the archaeological vice of writing in turgid jargon. The book is beautifully written with a splendid turn of phrase: the Games are described as ‘War minus the shooting’, and I loved too his description of Achilles ‘who no warrior could match in his capacity for multiple homicide’.
This little book is cheaply printed and thus the numerous illustrations are all somewhat drab: it needs, surely, to be re-printed in a ‘popular’ version with proper colour illustrations. But this is a splendid introduction to the ancient Olympics with an excellent final chapter on their afterlife in modern times