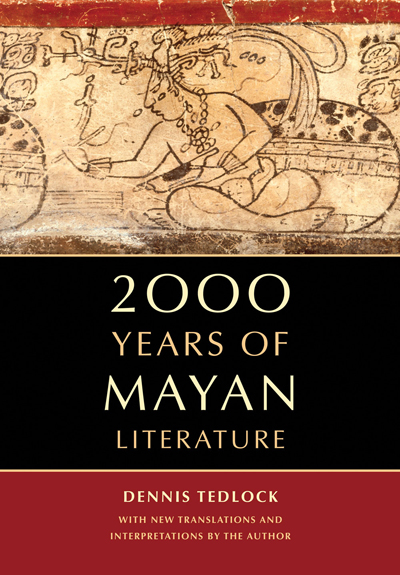 The only work of Mayan literature known outside specialist circles is the Popol Vuh, the 16th century Quiché Mayan book of creation, which has roots in Mayan myth and legend going back perhaps 2,000 years to the pre-Classic Maya civilisation.

Precursors of episodes and characters in the Popol Vuh have been found in the art and hieroglyphic writing of the ancient Maya. However, the material was only compiled as a book after the Spanish conquest ofGuatemala. A group of anonymous Quiché Maya wrote it, probably between 1554 and 1558, in their own language but in an alphabetic script borrowed from the Spanish, following the Spanish suppression of their own hieroglyphic script as being the work of the devil. Their original manuscript, which does not survive, was transcribed by a Dominican friar in Guatemalaand translated into Spanish around 1701. Since then, there have been many translations, of which the most readable is probably that made by the veteran American anthropologist Dennis Tedlock. In 1986, his Popol Vuh won the PEN translation prize for poetry.

The 1980s was the decade when the decipherment of Mayan hieroglyphic writing, controversially proposed by Yuri Knorozov and others in the 1950s, took off in earnest. Although Tedlock has not been personally instrumental in this exciting archaeological breakthrough, he has been closely associated with many of its leading figures, such as Linda Schele, Michael Coe, and David Stuart. He is, therefore, peculiarly well placed to write a book that covers the entire span of Mayan writing and literature from the hieroglyphic beginnings to the alphabetic present day. The result, 2000 Years of Mayan Literature, is a first of its kind, which is also imaginatively written, superbly illustrated, beautifully produced and, above all, highly authoritative.

Following the decipherment’s nowundisputed success, ‘the time has come’, Tedlock writes in his introduction, ‘to take a further step and proclaim that literature existed in theAmericas before Europeansgot here – not only oral literature but visible literature. So far, there is very little in print that would bring such a claim to life. Much decipherment has taken place but very little in the way of translation’.

Part one of the book is devoted to Mayan writing in hieroglyphs – ranging from the stone and ceramic inscriptions found at sites such as Chichen Itza, Copán, Palenque, Tikal and Yaxchilan to Mayan almanacs like the Dresden Codex. Part two discusses post-Conquest Mayan writing in alphabetic form, such as the Chilam Balam books. For  srchaeologically minded readers, part one is therefore of greater interest than part two, whereas part two, dealing with the Popol Vuh, makes the stronger case for Mayan writing as literature, rather than simply invaluable historical evidence.

Tedlock does not assume familiarity with the hieroglyphic system, and provides an excellent introductory survey in his first chapter. But, as anyone who has tried to understand Mayan hieroglyphs will admit, the system is exceedingly complex; many inscriptions still elude the understanding of Mayanists. It is fair to say that after chapter one, the book’s presentation, though never unclear, makes few concessions to a reader who is not already attracted to the subject. That said, anyone who enjoyed a book such as Coe’s well-known Breaking the Maya Code – or indeed Tedlock’s translation of the Popol Vuh – should find Tedlock’s latest book to be a natural companion. For those seriously interested in Mayan writing, the book is a must-buy.

By way of example, one of my favourite hieroglyphic inscriptions gets extensive treatment. It appears in a Late Classic painting on the outer surface of a bowl with vertical sides. One half shows the elderly deity Pawahtun, a patron of writing, giving a hieroglyphic writing lesson to two prosperous-looking young male scribes, who attend their teacher somewhat casually. On the other half, the same deity studies the numerals and words written by one of the pupils with obvious displeasure, which is reflected in the young man’s anxious reaction. The teacher’s hieroglyphic comment runs from left to right above his head and then down in front of him, where it is connected to his mouth by a wavy line like a speech bubble in a cartoon. Although experts are not yet entirely agreed on the  interpretation of all of these hieroglyphs, the nature of the pupil’s error is now transparent, as Tedlock illustrates by putting the pupil’s version side by side with the correct form of the teacher’s words, found in the Dresden Codex. Moreover, the teacher’s final remark can be transliterated into Mayan, by general agreement, as ta-ta-b’i, which means ‘badly written’. This exquisite match between visual and literary forms on the bowl is satisfying evidence for the decipherment’s accuracy.

Almost two centuries have passed since the Egyptian hieroglyphs were deciphered in the 19th century. The 20th century Mayan decipherment is barely half a century old. Whilst Mayan literature is never going to rival ancient Egyptian literature, as Tedlock would certainly concede, because the Spanish destroyed all but four of the thousands of pre-Columbian books that probably once existed (according to Coe), it is a fair bet on the evidence of this remarkable book that Mayan writing will continue to surprise and charm scholars, and many general readers, during the coming decades.

Review by Andrew Robinson, the author of Writing and Script: A Very Short Introduction and Lost Languages: The Enigma of the World’s Undeciphered Scripts.