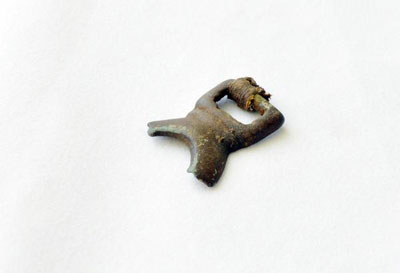 An ancient Chinese-style bronze buckle found by a team from the University of Colorado Boulder in Alaska may prove the earliest evidence of trade links with East Asia. The CU-led excavations are part of a National Science Foundation-funded project to study human responses to climate change at Cape Espenberg from AD 800 to AD 1400, a critical period of cultural change in the western Arctic.

The house had been dug by early Inupiat Eskimos into the side of a beach ridge at Cape Espenberg on the Seward Peninsula, within the Bering Land Bridge National Preserve. It was dated to AD 1000. Yet, surprisingly, carbon dating from the leather attached to the bronze buckle yielded an earlier date of AD 600 – leading to speculation that it may be evidence of an earlier component within the house mound.

The bronze artefact was probably a part of a horse’s harness and bears a strong similarity to those found in Bronze Age China, suggesting that it is much older still.

How it arrived on the frozen shores of Alaska is still a mystery: Owen Mason, of University of Colorado Boulder, says that ‘heirloom is the working hypothesis. But how it got here? Trade seems the most likely answer.’