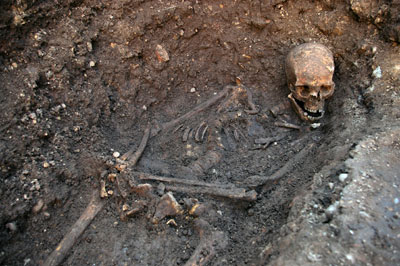 Human remains found beneath a Leicester carpark are those of Richard III, England’s last Medieval monarch, a multi-disciplinary team of experts have announced.

The skeleton of Richard III was found by University of Leicester Archaeological Services last September, interred in what had been the choir of Grey Friars church. Historical sources record that the Plantagenet king was buried in the friary after his death at the Battle of Bosworth in 1485, but following the Dissolution of the Monasteries the building was demolished and his grave forgotten for 500 years.

Now, detailed osteological and genetic analysis has confirmed that the Grey Friars individual is the lost king. A sample of mitochondrial DNA, which is passed down the female line, was extracted from a tooth and compared to samples from two living female-line descendants of Richard III’s sister, Anne of York. This revealed a match between the family of Richard III and the skeleton. Radiocarbon analysis supported this identification, returning dates of AD 1455-1540, and revealing that the individual had enjoyed a typically aristocratic high-protein diet, particularly rich in marine food.

‘Our conclusion, beyond reasonable doubt, is that the individual exhumed at Grey Friars is indeed Richard III,’ said lead archaeologist Richard Buckley.

Examination of the king’s remains has laid to rest some of the popular myths about Richard III’s appearance. Although he suffered from severe scoliosis, a sideways curve in his spine that made his shoulders uneven, he was not a hunchback, nor was there any evidence of the withered arm described by Shakespeare.

Osteological analysis also shed light on Richard III’s brutal end – something discussed only briefly in historical accounts. Ten wounds, mostly to the head, had been inflicted with a bladed weapon at or just after the time of death. Three glancing blows to the scalp had shaved off thin slivers of bone, while a fourth had punctured the top of the skull. Two more wounds to the back of the head, cleaving away large parts of the skull, would have killed the king almost instantly.

The team also found evidence that Richard’s remains were mistreated after his death. Cuts to Richard’s rib and right pelvis, indicating stab wounds to the back and buttock – areas that should have been protected by armour – hint at ‘humiliation injuries’ being inflicted on his corpse. Historical sources describe how the king’s body was stripped and carried back to Leicester for public display, slung over the back of a horse – a perfect opportunity for an onlooker with Lancastrian sympathies to inflict these final insults.

Further indignities were revealed by the excavation itself. Although the king had been granted the basic rites of a Christian burial in the friary church, the hastily-dug grave was irregular in shape and too short for his body. No evidence of clothing, a shroud, or a coffin was found, and the fact that the skeleton’s arms were crossed at the wrists – an unusual arrangement for this period, where the arms are usually straight at the sides – could indicate that they were bound at the time of burial.

Richard’s remains are expected to be reburied in Leicester Cathedral later this year.