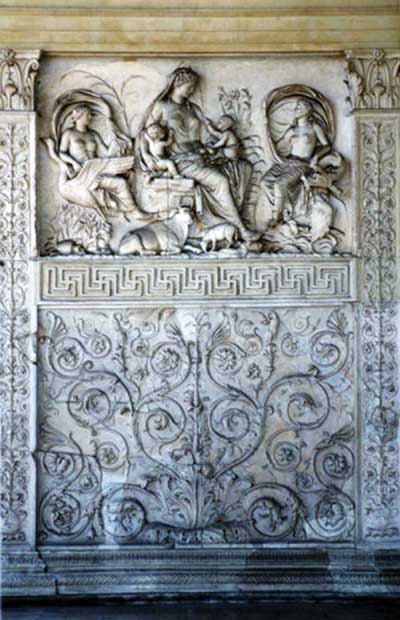 Rome has a fascist mayor for the first time since the war. Sorry, ‘post-fascist’. He was elected while I was there with a group of Open University students in late April 2008. And, I understand, he has his sights trained on the new Ara Pacis Museum.

Gianni Alemanno, like other Italian fascists, now poses as a respectable politician – he was Minister of Agriculture in two Berlusconi cabinets. But previously, from 1988, he was national youth secretary of the Italian Social Movement (MSI), and then, in 1995, he co-founded the yet more extreme Social Right when the MSI repackaged itself as the ‘post-fascist’ National Alliance. Alemanno still heads the Social Right, which operates as a right-wing pressure group inside the National Alliance. Unsurprisingly, perhaps, his election as mayor was greeted by enthusiastic crowds giving the straight-arm salute and crying ‘Duce! Duce!’.

As Richard Hodges explained in an earlier postcard (CWA 20), the Ara Pacis is a highly charged monument. It was a showcase of Augustan ideology 2,000 years ago, with its reliefs of Aeneas, Romulus and Remus, female fertility deities, and processions of the great and the good. It got a new lease of life in 1938, when hundreds of bits were painstakingly reconstructed at a new location beside the Tiber, and a specially designed pavilion was built to house the remains. This formed part of a new square, home also to the Mausoleum of Augustus, which was framed by a series of new buildings in the distinctive futurist-classical style of the fascist era.

The invention of tradition

Subsequently, the whole area – probably because of its strong fascist associations – was neglected. On a visit a few years ago, I found the Mausoleum of Augustus overgrown, filled with litter, and stinking of urine. Even then, however, refurbishment had begun at the Ara Pacis itself. New York architect Richard Meier had been commissioned to design a new museum to display the monument. This finally opened to the public in 2006. Now Alemanno wants to tear it down – some £15 million worth of glass and marble – and plans a referendum to decide.

‘It is an issue of compatibility,’ he announced on an Italian TV show. ‘It is in a baroque part of the city, and that style suits the area.’ This is nonsense: the square is futurist-classical, not baroque. It seems more likely that the agenda is political: to remove a modernist structure which replaced a fascist original and is associated with Rome’s former culture minister and defeated liberal mayor, Francesco Rutelli.
Interesting. Mussolini patronised avant-garde modernists in architecture. Today’s fascists – whoops, ‘post-fascists’ – seem to be artistic conservatives. Augustus would have approved: he was all for tradition.