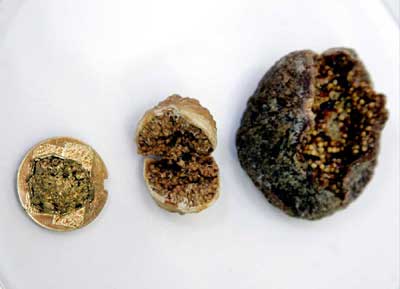 Figs dated to between 9,200 and 9,400 BC, found in a Neolithic site in the Jordan Valley, may represent some of the earliest evidence for agriculture.

Nine whole figs, measuring just 18mm (0.7in) across, plus 313 fig pips, have been discovered in a house in the early Neolithic village of Gilgal I by a team of researchers from Bar-Ilan University in Israel and Harvard University.

The researchers suggest that the variety of figs found could have only been grown with human intervention and were therefore probably not a wild breed. Indeed, the type of fig discovered was a self-pollinating ‘parthenocarpic’ variety of the kind we eat today. Though such fig trees can appear occasionally in the wild by chance genetic mutation, they do not produce seeds, so cannot reproduce alone. Instead, they require a shoot to be removed and replanted.

The archaeobotanists Dr. M. Kislev and Anat Hartmann of Bar-Ilan therefore suggest that in these figs we can see the beginning of domestication since this variety of edible fig would not have survived were it not for human intervention.

The figs were found with wild barley, wild oats and acorns. Thus it appears that early Neolithic people mixed the domesticated figs with food cultivation, hunting and gathering. Though the exact origins of agriculture are complicated – not least because other carbonized foods, such as cultivated rice thought to date from about 13,000 BC, have been found in Korea – the discovery of these apparently domesticated figs is extremely important to the story of agriculture.