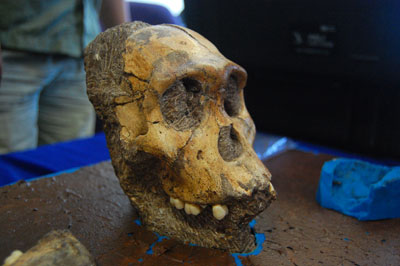 While most of our early ancestors preferred to eat soft foods such as grass and sedge, Australopithecus sediba enjoyed more roughage, including tree bark and papyrus in their two million-year-old diet.

Rich in protein and soluble sugars, bark and papyrus are eaten by many modern primates, but previous research into 81 other hominids had not shown they were consumed by human ancestors.

Scientists led by the Max Planck Institute of Evolutionary Anthropology in Leipzig have analysed the enamel of fossilised teeth from two A. sediba to find the distinctive carbon signatures of soft and hard plants. Microscopic pits and scratches on the teeth, and fossilised plant particles (phytoliths) trapped in the ancient tartar, confirmed this unique diet.

‘This gives us a clear – and surprising – picture of A. sediba’s diet,’ said Texas A&M University’s Darryl de Ruiter. ‘It was like a modern chimp’s.’