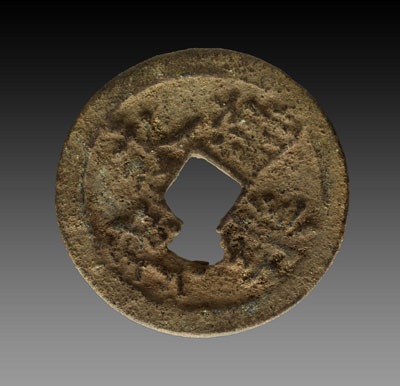 Excavations on Manda, an island off the coast of Kenya, have revealed a 600-year-old Chinese coin linked to the expedition of Admiral Zheng He, the celebrated Ming Dynasty explorer.

Found in a midden by researchers from the Field Museum in Chicago, and the University of Illinois, the small copper and silver disc has a square hole in the centre to allow it to be worn on a belt.

It was issued by Emperor Yongle (r.AD 1403-1425), who started construction of China’s Forbidden City, and sent Zheng He to investigate possible political and trade missions around the Indian Ocean.

‘Since the coin was minted during the reign of Emperor Yongle and Manda was abandoned in the 1430s, it follows that the coin reached the island during that period,’ said project co-director Dr Chapurukha Kusimba, curator of African Anthropology at the Field Museum. ‘The likely source could be a merchant accompanying Admiral Zheng He on his East African voyage.’

He added: ‘Zheng He was, in many ways, the Christopher Columbus of China. It’s wonderful to have a coin that may ultimately prove he came to Kenya.’