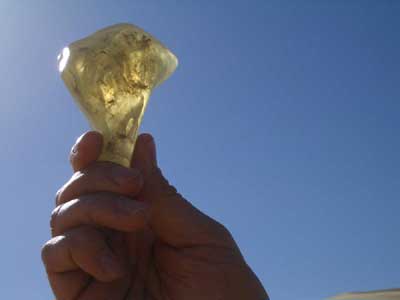 A unique and beautiful yellow-green glass occurs in ‘the Great Sand Sea’, a huge and inhospitable area of moving sand dunes in the Egyptian Sahara. The glass was first documented in 1932 by Peter Clayton, a topographer for the Geological Department of the Survey of Egypt. However, it is clear that locals have known about this type of glass for thousands of years. Recently, an intrepid group of scientists ventured into the Great Sand Sea to find out more. Ashley Anderson, of production company TV6, which has made a film on the subject, reports.

Italian archaeologist and geologist Vincenzo de Michele is an expert on the yellow-green silica glass. In 1996, he noted that a scarab in the centre of a pectoral in the Tutankhamun exhibit in the Egyptian Museum in Cairo appeared to be made of this unusual glass. Though the scarab was listed as being the mineral chalcedony, when de Michele was granted access to test it, he found it to be consistent with desert glass samples found in the Great Sand Sea. In another room of the Egyptian Museum, the prehistoric section, he discovered that a knife – roughly four inches long and estimated to be about 5,000 years old – was also found to be made of the same glass. Indeed, various people travelling through the Great Sand Sea had reported finding pieces of the glass that had been worked.

This drew considerable interest among his colleagues: the yellow-green silica glass has a small but fervent following, including archaeologists, geologists and explorers. However, the question of the origin of the glass still remained unanswered. Various theories have been suggested, including a low temperature theory – it was sediment left behind by the drying out of a swamp – and also a volcanic origin theory. Now, uranium testing has established that the glass was formed nearly 30 million years ago. Moreover, by measuring ratios of zircon it has been estimated that the temperature needed for formation was about 1,800 degrees Celsius – so ruling out both the low temperature formation and the volcanic theories.

Austrian astrochemist Christian Koeberl and German geologist Barbara Kleinmann were among the scientists who tested the glass in an attempt to discover its origin. Koeberl found traces of the elements iridium and osmium, and Kleinmann found shock cracks in the glass grains. These two aspects point to a meteoritic origin for the glass.

The only question left is: if this glass comes from a meteorite, then where is the crater?

In February of this year, Koeberl, Egyptian geologist Aly Barakat, and American impact physicist Mark Boslough, travelled by offroading vehicles over massive sand dunes for three days to the areas in which the glass occurs in the Great Sand Sea in search of the crater.

Unfortunately, they found no signs of one, and nor was any such crater apparent from satellite imagery. Despite this, Koeberl and Barakat still believe there was an impact, and that a crater will be discovered at some point. However, physicist Boslough is not so sure, and instead hypothesises the likelihood that the meteorite would have exploded in the air and would thus have not left a crater.

The story of the search to understand this gorgeous glass is being told in a new film, Tutankhamun’s Fireball, scheduled to be broadcast on 20 July at 9pm on BBC2, and produced by TV6 Limited – a production company based in West London and run by BAFTA-winning executive producer Richard Reisz.