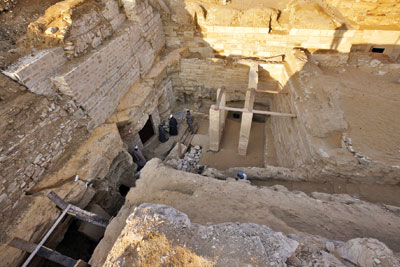 Excavations at Abusir, south of Cairo, have identified the 4,500-year-old tomb of an ancient Egyptian princess called Sheretnebty.

More than a mile from the burials of the rest of her dynasty, she had been laid to rest in a complex of rock-cut tombs, in a part of the site dedicated to the graves of non-royal officials.

Archaeologists from the Czech Institute of Egyptology at Charles University, Prague, discovered the burial in an almost 4m-deep (13ft) courtyard hidden from view by surrounding mastaba tombs. In the centre were four stone pillars, originally supporting limestone lintels and roofing blocks, which bore hieroglyphic inscriptions reading: ‘King’s daughter of his body, his beloved, revered in front of the Great God, Sheretnebty.’

The princess’s name, together wi