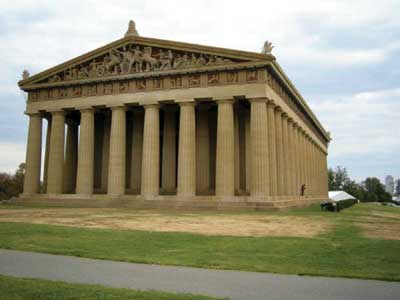 In 1879 Charles Eliot Norton, Professor of Art History at Harvard University founded the American Institute of Archaeology (AIA). This led to the publication of a major journal, American Journal of Archaeology, and the American School of Classical Studies in Athens.

Shortly after Norton died in 1905, James Loeb, established a lectureship in Norton’s name for ‘some distinguished foreign lecturer’. The first was D.G. Hogarth, Director of the Ashmolean Museum and first mentor of T.E. Lawrence. To my surprise and delight I was honoured in 2005/6 to share this venerable lectureship with Professor Susan Langdon of the University of Missouri at Columbia. My task was seemingly simple: offer lectures to nine chapters of the AIA in the American Mid-West.

My proposal of a choice of lectures on either Albanian or Italian archaeology was accepted. Then arrived emails from the AIA’s Boston office outlining a zig-zagging route by air and car for me to visit places of which I had only the vaguest knowledge. Setting out from Heathrow on the 13th October for Chicago, I mused that unlike such eminent British predecessors as Thomas Ashby, Mortimer Wheeler and Kathleen Kenyon, I was likely to spend as long in airport security as I was actually lecturing. Such are the great changes over the past 97 years of the lectureship.

13 October: a long but uneventful flight to Chicago, then St. Louis. My hire car was ready and I made it to the Cheshire Inn in the dark. My hosts had chosen a timber-framed hotel full of English idioms.

14 October: after breakfast I discover every room has wireless email (something I was to discover everywhere); contact with home is much easier than I imagined. The Indian summer is in full swing, the sugar maples being a seductive russet colour. I am treated to a tour of the St. Louis Art Gallery, set in its rolling parkland, and then to lunch beside a group of exuberant older women wearing huge red hats (a dining club). To my great relief, my powerpoint presentation works and one hundred and fifty people, mostly from the community, come to hear me speak on Butrint. Of these, several are Albanian and invite me for a coffee on Sunday; one young woman is even from Saranda, the nearest town to Butrint. They speak of Albania elegaically at the reception in this elegant museum. Later I stay in Professor Michael Fuller’s English long-hall, drink Macedonian wine and talk about Macedonia where he is currently excavating a Byzantine fortress near the Roman predecessor of Skopje, Scupi.

16 October: pass the great arch that distinguishes St. Louis and cross the Mississippi into the neighbouring state of Illinois to visit Cahokia, the great Indian mounds belonging to the 9th to 12th century. The World Heritage Site is set in well-managed countryside with an attractive visitor centre and evidently attracts many visitors. It boasts a woodhenge, now reconstructed, but its catch-phrase is that with a population of more than 20,000 in 1250 it was bigger than London. By any standards it is an extraordinary site, well-studied and discretely presented, which had been largely abandoned by the time a modest church was erected by the first white settlers on the pyramid-like Monk’s Mound.

17 October: drove to Fulton, Missouri to visit the tiny town gathered around Westminster School where Winston Churchill in inimitable language first described the iron curtain in 1946. The museum is shut, but a huge statue of Churchill presides in front of the restored St. Mary the Virgin Aldermanbury – a Wren church, badly damaged during the blitz, which was brought to this spot and exactingly restored. Close by his grand-daughter erected a tract of the actual Berlin Wall in the 1990s. Onto Columbia, Missouri, where the large audience comprises mostly professors and students. Wary of the powerpoint age, the department shows me it hoard of Kodak slide projectors – now no longer made!

18 October: to Kansas City, which is mostly in Missouri, as opposed to Kansas! Missouri and Kansas fought on opposing sides in the Civil War and a certain rivalry persists today. The Nelson-Atkins Gallery is being rebuilt on a huge scale with grounds that conjure up an image of Versailles. It has fine if modest archaeological collections. Nearby is America’s oldest shopping mall. Dating from the 1920s, it was modelled upon Seville and is unexpectedly elegant. At tonight’s lecture on Butrint I meet the cousin of Tirana’s mayor, as well as many Kosovans.

19 October: back a time-zone in a cramped jet to Cincinnati and a large crowd of graduate students in the university’s flourishing graduate programme in classics.

20 October: by car into Kentucky to meet John Hale in Liberal Arts at the University of Louisville. John obtained his PhD at Cambridge, but returned to his roots and has a strong following amongst undergraduates to whom I give a class on Butrint with the powerpoint projector bulb fading as the hour wore on. Later he assembles a large AIA chapter meeting from the city and after, as is customary, we go out to dine on good local, in this case, Kentucky, fare. We crossed the River Ohio to Indiana and his house in a suburb where every doorstep is decorated with Halloween pumpkins.

21-23 October: back to Cincinnati to participate in a lively workshop on Albania, followed by two days exploring Ohio with Jack Davis, the Blegen Professor, and Shari Stocker. At Ripley overlooking the Ohio River we visit the little house of the Reverend John Rankin, featured for his humanity in Harriet Beecher Stowe’s classic, Uncle Tom’s Cabin. Perched high on the Ohio side overlooking the river, the house with its concealed cellars was a celebrated starting-point for the ‘underground railway’ by which black slaves were led to freedom in Canada and away from Kentucky bounty hunters. We cross into Kentucky on a tiny ferry, dodging the half-mile-long coal barges here. On a second trip we visit the great Indian sites at Serpent Mound, Seip’s Mound and the constellation of mounds tucked between sprawling penitentiaries at Chillicothe. The most extraordinary objects on display are the wafer thin mica sheets, the size of a breakfast cereal packet, deployed to cover high-status burials.

24 October: after seeing the mounds it is time to meet the team presenting them to the public – the Center for the Electronic Reconstruction of the Historical and Archaeological Sites (CERHAS) – at Cincinnati, before traversing the state of Ohio to the massive (The) State University of Ohio at Columbus where dreadful wintry weather means a small but appreciative gathering.

25 October: thanks to Mapquest, a compterised map print-out, it takes only 8 hours to drive 490 miles from Columbus through southern Ohio, West Virginia (in snow), Virginia to Chapel Hill in North Carolina. The road winds through deep valleys clothed in high forests all extraordinarily resplendent in ochrous autumnal shades. Chapel Hill is America’s oldest state university and very much a southern university. The brick-built quads and elegant temple-like pediments conjure up a strong sense of the colonial age. Old and New World archaeology is thriving side by side here, and Richard Talbert, editor of the Barrington Atlas, has established an institute devoted to ancient maps.

26 October: lunch with Vin Steponaitis, past-president of the Society of American Archaeology and a leading authority on the Mississippian culture (as at Cahokia). Vin describes the fissure separating university and contract archaeology, which he has done much to heal. To illustrate this he takes me through Chapel Hill’s burgeoning archaeology department where large-scale projects on the Catawba and Cherokee Indians are underway. On, then, to neighbouring Greensboro, and after dinner in the Acropolis with Old World scholars, a lively audience in the university.

27 October: last stop – by air to Nashville via Cincinnati in tiny jets. A country and western singer is performing in the arrivals hall!! Barbara Tsakirgis whisks me off to the Parthenon, a one-to-one concrete version of the original in Athens with a splendid Athena, amply filling the main cella and resplendently covered in gold leaf. To my astonishment, I lecture on Butrint in the pronaos, where the acoustics are odd but the setting for the large audience is unforgettable. A marvellous place to end this journey.

Eleven talks; thousands of miles; ten different bedrooms all fitted with wireless! A few valedictory thoughts: American archaeology is alive and well with plenty of energetic graduate students supporting strikingly enthusiastic teachers. Strangely, though, the discipline is more fractured than ever. Notwithstanding Vin Steponaitis’s efforts, those archaeologists in classics have little or no contact with those in anthropology. The Old and New Worlds seldom meet, just as Colin Renfrew pointed out 25 years ago.

One theme came up at every stop: Marion True, Curator of Greek and Roman Antiquities at the Getty Museum is being prosecuted by the Italian authorities for allegedly handling a stolen object(s). Many of my hosts had sympathy for her and, whether involved in classical archaeology or the repatriation of American Indian objects, were generally thoughtful on how complex the antiquities market had become. It is a key issue in contemporary archaeology which, like cultural heritage tourism, actively engages opinions in lay and professional audiences alike. Charles Norton might have been amazed to hear such talk, but equally, I rather suspect, he would be proud to hear the passion with which archaeology in these forms is debated – far from Athens and Rome – in America’s Mid-West.