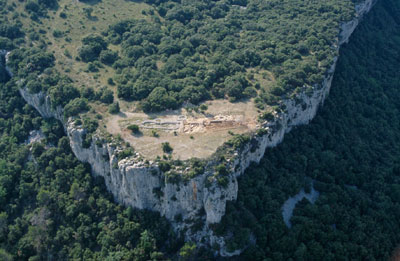 The description in Robert Louis Stevenson’s Travels with a Donkey of the great storyteller’s long walk across the Cévennes in southern France has inspired many to follow in his footsteps. But the landscape to the south is just as enticing and certainly worth exploring.

Essential for any expedition is a map. There are few things more enjoyable than poring over the details of a map, especially fortified with a glass of the local stuff to provide a sense of what the French call terroir. Fortunately, France is blessed with maps that are both accurate and aesthetically pleasing. The Institut Géographique National’s Map 2742ET (Ganges, St Martin-de-Londres, Pic Saint-Loup) is a beauty: it is one of the IGN’s maps for walkers at a scale of 1:25,000 (1cm = 250m) and covers a chunk of Languedoc just over 21km by 28km, enough to get a feel for the area, but with sufficient detail to enable a walker to navigate the boondocks.

The gorge of the River L’Hérault cuts across the map directly from north-east to south-west. To the east is one of France’s most dramatic limestone escarpments, the Crête de Taillade/Montagne d’Hortus, which slides like a breaking wave to crash against the great crest of Pic Saint-Loup in the south. At the Pic, the scarp ends in sheer cliffs 400m high – no place for sufferers from vertigo.

Below Pic Saint-Loup lies the village of Les Matelles. The map shows that this place has a museum. By coincidence, the local newspaper Midi Libre mentions that there is an exhibition there entitled Mur-murs de Préhistoire (a French play on words, involving murmurs and walls).

Les Matelles is a great discovery in its own right: a small Medieval gem. A fortified village on a rock by the River Lirou, no more than 80m across, it started life as a castle collecting tolls on the east–west route through the scarps. I was told this by the young curator, Léna Hessing, who presides in splendid isolation over her museum. A few years ago in 2008, CWA 31 carried an article about the excavations at Langlade, near Nîmes, where archaeologists uncovered a superb late Neolithic/Chalcolithic village of stone long-houses and circular structures, all linked by an encircling wall. Such settlements are distinctive features of the limestone plateaux of the South of France, important elements of the 3rd millennium Fontbouisse Culture. Now Léna and local archaeologists have put together a fine exhibition about these important sites. Especially informative are the reconstruction models and aerial photographs provided by Jacques Coularou of CNRS Toulouse.

Some of these Fontbouisse sites are still visible in the landscape and I went to investigate – but not before stopping off at Le Pet du Diable (The Devil’s Fart), a suitably Rabelasian name for a restaurant built into the Medieval ramparts of Les Matelles. Lunch was a plate of charcuterie, pink duck breast in a foie gras sauce, and a pear and almond tarte, lubricated with a cool rosé Domaine Salle de Gour. Glyn Daniel, author of The Hungry Archaeologist in France, would have felt at home.