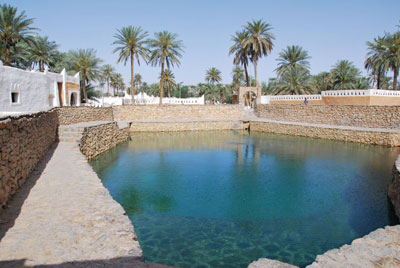 It is an exhausting day’s drive – 700km south-east of the Libyan capital of Tripoli – to reach Ghadames, the site of arguably the most sophisticated mud architecture in North Africa. Leaving Tripoli’s jumble of concrete and spectacular Roman ruins on the Mediterranean coast, the road twists south through the Jabal Nafusa escarpment before descending through bleak desert scrub into classic Saharan sand. The sense of remoteness is potent: pylons alternate with rusting car-wrecks, oil pipelines, and camels in what is otherwise a flat, featureless landscape. Just before we reach our destination, a sudden sandstorm billows across the road, reducing visibility to a few metres and reinforcing the harsh reality of the desert. Then, in a flash, it is gone. With such highs and lows, the Sahara is not to be trifled with.

Ghadames is the legendary oasis town that nudges the modern border of Algeria. Once as important as Timbuktu on the trans-Saharan trade routes, it gained the enviable epithet ‘pearl of the Sahara’. In 1986, the ancient walled medina of 1400 houses was declared a World Heritage Site by UNESCO. In this uniquely planned and designed town, the Ghadamsia lived for centuries, enjoying the cool of their stunningly decorated houses, praying in their mosques, trading, cultivating their gardens, or strolling along covered streets while temperatures soared into the high 40s outside. But this is a fast-changing world and since the mid 1980s, its c.10,0000 inhabitants (joined by about 5,000 immigrant workers) were moved to an adjoining ‘new’ town on Colonel Qaddafi’s orders. Sadly, these modern homes are cheaply built concrete high-rises that offer satellite dishes in place of coolness and beauty. Luckily, this has resulted in some Ghadamsia carefully maintaining their old medina homes to use as daytime retreats from the fierce heat of summer.