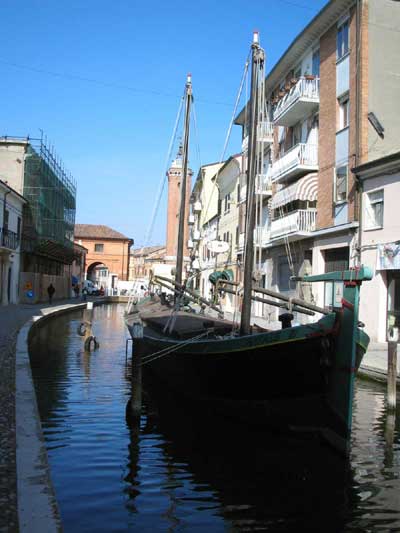 My first appearance on YouTube (ie in heady pre-Twitter and Flickr days) recorded my beaming delight at hearing Sauro Gelichi describe his first excavations at Comacchio. We were at a conference in the Tuscan town of Poggibonsi, far from the Adriatic seaport that Sauro was describing. Being chair of the conference session, I was able to direct a volley of questions before the audience could get a word in edgeways.

Why was I so excited? Sauro Gelichi, Professor of Medieval Archaeology in Venice University, had not only described the discovery of the Lombard trading port – emporium – at Comacchio, but cleverly spiced the conclusion of his lecture by comparing this new discovery with the great Dark Age trading towns around the North Sea – Hamwic, Saxon Southampton; Dorestad, in the Netherlands; Haithabu in Germany; and Ribe in Denmark. North and South Europe were being hooked together in a visionary new appraisal of the dawn of the Middle Ages.

Before long, I was in Comacchio to see the place for myself. It was as though I was continuing a pilgrimage of the 1970s when I visited all the north European emporia, savouring the very best of Dark Age archaeology in places as different as the blissful Birka, in the Swedish lake Malären, and the wind-blown Domburg on the Dutch island of Walcharen. Indeed, as I arrived at this new dig in the town square, the Piazza XX Settembre, beside the town’s baroque cathedral and peered down at the elegantly attired Italian diggers eagerly scraping away at the black levels, one of them suddenly unbound himself and stood bolt upright. He was staring hard, captivated by something miniscule in his hand. Pure serendipity: he handed the object to the supervisor and it glinted. Twisting it in his fingers, this bearded individual announced with a knowing smile that it was a denier minted in Venice, soon after Louis the Pious became (Carolingian) emperor in 814.

Comacchio lies close to the mouth of the River Po, a few kilometres inland from the Adriatic Sea. It is 30km north of the Byzantine imperial capital of Ravenna, and 100km south of Venice. It is with Venice that it is now connected, thanks to Sauro’s energetic research.

The town today resembles in many respects a modest quarter of Serenissima. There are canals and narrow boats, a labyrinth of passages, and, above, a flat sky. Seagulls wheel over the town, before gliding eastwards to scavenge along the many channels and inlets. Tourists come here from the coastal resorts to the north and south to eat sea food and, especially, eels. Famed for its eels, every restaurant and café is ready to prepare these creatures fried, battered and then diced. Outside the town, fishing booths with nets framed by gantries line the waterway past Porto Garibaldi to the coast. These fishermen provide the fare that makes Comacchio today essentially a tourist town.

As for its past, occupying one of the web of branches of the Po close to the Adriatic, Comacchio was a surprisingly important port in Etruscan times. Lombard sources show that this role was renewed in the later 7th and 8th centuries and evidently prospered as Ravenna became an increasingly isolated outpost of Byzantium. The Comaclenses (the inhabitants of Comacchio) are best known from a capitulary or pact issued between AD 715-731 by the Lombard King Liutprand.

This extraordinary document provides instructions to the leaders of the port on harbour and other fees in Po valley towns like Bergamo, Brescia, Cremona, Mantua, Parma and Piacenza, places that were now diminutive in scale after the collapse of the Roman world. Salt from the Po estuary pans seems to have the principal cargo to these Lombard riverine wharfs.

The 715-731 pact, of course, has attracted much interest among historians. The present interpretation is that Comacchio was a kind of independent commercial entity, the outcome of a treaty made between the Lombards and their neighbours, the Byzantines resident in the Exarchy of Ravenna. But differences exist on whether it was an independent centre located between the two territories or answerable in some way to the Byzantines. A generation later it was evidently in Lombard hands, in 756, when the Frankish King Pepin marched over the Alps into Italy to support the beleaguered Pope Stephen. Pepin compelled the then Lombard king, Aistulf, to sue for peace and robustly appropriated Comacchio for the papacy. Fast forward into the 9th century, and following a treaty in AD 812 between the Frankish emperor, Charlemagne, and the Venetians at Rialto, Comacchio’s fate was sealed. A vivid 19th century painting in Comacchio museum depicts the end of the town in 881 when it was sacked by their upstart neighbours.

The 715-731 Lombard-era pact has always held a fascination for Sauro Gelichi. It is a rare illustration of on-going commerce in the Dark Ages, with salt and perhaps precious goods passing from Comacchio to the line of largely defunct towns and monasteries along the Po, one of Europe’s pre-eminent waterways. From here, many have surmised, the finer objects were passed onwards, by way of the Alps, to the Rhine basin and then, again, to the North Sea and Anglo-Saxon England and Denmark. Coptic (Egyptian) teapots and ladles, for example, found in 7th century Frankish and English cemeteries may have travelled this long route from one place to the next, first entering Europe at Comacchio. Comacchio, in short, was for a time a gateway into Latin Christendom conceivably as far as the kingdoms around the North Sea. Over many years Sauro, recognising this, combed the muddy flanks of the deep rivulets and canals for tell-tale potsherds that might define exactly where the famed Comaclences lived. Then in the 1990s, a salvage excavation ahead of a new housing development brought to light the sodden stumps of timber jetties and piers belonging to exactly this time. So began Sauro’s quest that now has led to excavations beside the cathedral and new digs in search of the jettied harbour.

I have come this spring to see an exhibition L’Isola del Vescovo (Bishop’s Island) in the ornate Settecentesco Ospedale degli Infermi – now the town’s canalside museum – depicting the new excavations beside the cathedral. Following the inauguration, there is an international congress to welcome Comacchio into the club of great Dark Age European sites. The exhibition shows that the emporium was full of post-built dwellings covering as many as 30 to 40 hectares. More to the point, its ample deposits of wine and garum amphorae, soapstone (so-called pietra ollare) from the Alps, and locally made glass confirm the volume of its trade between the Po valley and the upper Adriatic, with some containers coming from as far away as the Black Sea.

The careful 2007 excavations by the cathedral offer a tantalising hint of the archaeological promise. Here a glass-workshop was found with all the equipment more or less in place. Remains of the stone dwelling, the furnaces, and the associated components that one can see still today at Murano near Venice were found in place. This workshop, though, began life in the later 7th century, probably making lamps and window glass for the local monasteries. Piles of coloured glass tesserae show that the raw material was being stripped from the wall mosaics in abandoned Roman buildings. By 800 or so, though, the workshops had been foresaken as the precursor of the modern cathedral was erected close by, and around it were interred simple stone-lined graves. The celebrated coin of Louis the Pious, found as I chanced upon the dig, marks the moment that the workshops were moved elsewhere. The vivid debris of craftsmen and traders show that this was undoubtedly the motor of the regional political economy. No wonder, then, that hard on the heels of the truce with the Carolingians, successive Doges of Venice set out to crush their neighbour.

No excavation along the 1,000km length of the Adriatic coastline of Italy has produced anything as remotely as revealing as Comacchio. But, reflecting back to that discussion captured on YouTube, these first finds are an enticing appetizer for the extraordinary archaeological riches yet to be unearthed in Venice. The prospect of getting into these levels in our lifetime, given the problems of waterlogging, remain small. But here at Comacchio – in Sauro’s new exhibition as well as in his continuing excavation campaigns – the story of the transformation of the Roman world and the making of the Middle Ages is being rewritten.
Added to that, if you love eels, then this is definitely the place for you.