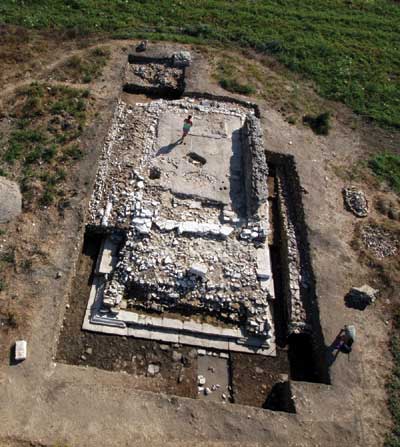 The chance to compare the archaeology of Albania with another ex-communist country, the Ukraine, came out of the blue. Butrint in Albania and Chersoneses in the Ukraine belong to the small portfolio of major archaeological projects supported by the Packard Humanities Institute (PHI). I have been excavating at Butrint, and PHI invited me to visit Chersoneses, so I eagerly accepted; with me came John Camp, the Director of the Athenian Agora project, another PHI-supported project.

First, though, to my surprise I needed to buy a visa at an Ukrainian embassy. This meant a two-day jaunt from Butrint to Athens and an 80 euro fee. Visitors to Albania by contrast, coming to see Butrint, pay 10 euros for a visa on arrival in Saranda, the nearest port. Thus tourism to Butrint is prospering, with an estimated 14,000 foreign visitors this year as well a staggering 40,000 Albanian and Kosovan visitors: the ticket revenues fund not only conservation and security but also popular concerts. Ukraine and Chersoneses on the other hand are unlikely to prosper from international tourism if they make entry as time-consuming as this.

Still, the embassy trip to Athens afforded me the opportunity to visit the Agora project in John’s company. Forty graduates from all over the States were participating in a structured programme invented nearly 75 years ago. The multi-period urban excavation was supported by a very well-organised finds processing system worthy of a German museum. This is a classical mecca for most American students of classics and classical archaeology, now being updated with a website and supporting data base (www.agathe.gr) used by several course modules in U.S. colleges. (Why, I wondered, has the British Academy not instructed the British Schools to develop similar integrated teaching programmes to resurrect classical archaeology in Britain? )

Our season at Butrint ended as I left for the Ukraine. It was the hottest season ever, and more than fifty Albanian students had participated. The excavations were especially enthralling because at last we have found the site of the Roman colony (see www.Butrintfound.dial.pipex. com). Previous excavations had concentrated on uncovering the classical Greek city: but where was the Roman colony? We found it on the flat land on the other side of the river: a five hundred metre assessment trench along a drainage ditch has enabled us to revise the chronology. Julius Caesar harboured his ships here in his campaign against Pompey, and aimed to establish a colony. His death, however, and lobbying by Atticus, a local landlord, delayed the transformation of this idyllic Republic sanctuary into a city until Augustus vanquished Mark Anthony at Actium. Augustus then established a colony at Butrint, settling veterans and slighting Corfu as he did. We believe we have found an exquisitely made altar belonging to the new town, a modest parallel to the discoveries found down the coast at Nikopolis (in northern Greece) where Konstantinos Zachos has been uncovering the Actium monument (soon to be described in a two-day conference at the British Museum, 14-16 November 2003).

The new results at Butrint are some compensation for the grinding daily trials of living in Albania, and in particular the aggressive attitude of the Ministry of Culture, which decided, for reasons best known to itself, to make the conservation of our excavations a high profile political issue. Juggling these different commitments to politicians and our sponsors, as well as to our archaeological collaborators and students, certainly stretched our energies as the afternoon temperatures reached 42 celsius. The meltem wind in Athens was a pleasant release; the lower Black Sea temperatures at Chersoneses were pure balm.

Chersoneses lies in the suburbs of Sebastopol, home until recently of the Soviet navy (see www.chersoneses.org). Since Bolshevik times it has been a closed city, limiting the extent of development in its Chora, the agricultural territory around it. Indeed, although more than a century of excavations have concentrated on the town, a Greek colony originally founded in the fifth-century, yet for Joe Carter, an archaeologist from Austin, Texas, the greatest asset is the Chora where the farms, holloway-tracks and walls for viticulture can be seen on the ground. For over ten years, Carter has mapped this agricultural hinterland, helped by the fact that Sebastopol, as the home of the Soviet navy, is one of those few places on the planet that has been photographed by satellites every day since the technology was invented. He has been able to compare the result of his mapping with the work he has done at Metaponto, the Greek colony in the heel of Italy where he has been working for thirty years. Chersoneses, however, is unlike Metaponto, for whereas Metaponto was in decline by the end of the Roman period, Chersoneses continued to thrive as a Byzantine and Medieval Black Sea port.

Preserving Chersoneses presents a very different challenge to our problems at Butrint. At Butrint we have been faced with an awesome political challenge to sustain the surroundings as a National Park in the face of mafia-led developers. The Preserve at Chersoneses faces an altogether different challenge. Well established with two Soviet style museums, a library, an archive and basement stores (the PHI has sponsored a new laboratory/store), the Preserve, being a tract of coastline in the suburbs of Sebastopol, attracts thousands of impoverished Ukrainians every day. From dawn to dusk they were queueing to pay a small fee to cross the site, ring the memorial bell, be photographed by the reconstructed Byzantine church and then to lie on a miniscule Black Sea beach.

Henry Cleere, who is a staff member of the project, and I debated good-humoredly about this. Henry, an ex-member of Icomos, is attempting to get World Heritage status for Chersoneses and the Chora. It certainly merits it. But I feared UNESCO restrictions upon these impoverished but gentle people, respectful of the archaeology. (Late afternoon, the museum was packed with bathers returning homewards….) Unlike Albania, always on the edge of anarchy – where rubbish defiles most places, the Ukraine has a Soviet order and cleanliness. The two could not be more different.
Henry’s point, though, has greater substance in the Chora where new residential blocks on the coast and modest summer houses in the landscape are obliterating this unique fossilised landscape. Yet again, though, there are older Soviet trained archaeologists and conservators who, with pitiful resources, have maintained a tradition that in Albania has virtually disappeared. In Albania foreign teams have re-ignited archaeology, training young Albanians; in the Ukraine, nurtured in this special case by Joe Carter with PHI funding, Ukrainians (or as they pointedly told me – Russians) are taking charge of their archaeological destiny.

As Neal Ascherson illustrated in his thoughtful book on the Black Sea (1995), the archaeological riches of this region are tied to its epic history. The valley in which the 600 members of the Light Brigade charged is still there; Lighthouse Point where a German army fought in vain to evade capture in 1944 is littered with shrapnel (Joe Carter excavated one of the unlucky ones, a German who died behind a Crimean War wall in a Byzantine fortress reusing a Hellenistic farm). Faced with this sweeping history, issues of identity, ownership and, of course, conservation and presentation are matters of daily debate. This puts archaeology where it should be – at the heart of modern culture. For the people of Albania and the Ukraine, the archaeology of Butrint and Chersoneses matters.