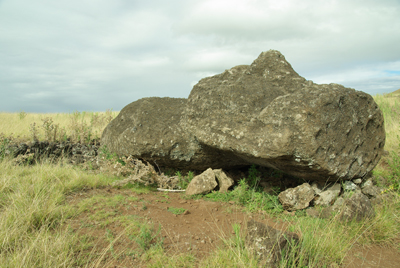 Fieldwork led by researchers at University College London (UCL) and the University of Manchester has shown that stone figures lying on their backs and faces beside the roads of Easter Island (Rapanui) were not abandoned by clumsy construction workers who dropped and broke the carvings en-route to the coast journey. Instead, each of the fallen statues is associated with a stone platform from which it has toppled with the passage of time. In other words, the roads themselves were not built and used exclusively for the transportation of the figures, as has been believed since Thor Heyerdahl first published his account of the famous statues in 1958, but formed statue-lined ceremonial avenues.

The 800-year-old road system forms a complex network of routes that criss-cross Easter Island, linking the quarry at the island’s volcanic cone at Rano Raraku, where the statues were carved between 1200 and 1500 AD, to the coastal areas where many of them still stand. Heyerdahl and subsequent researchers believed that the roads were simply a means to transport the statues, or moai, to their ultimate destination, overlooking the coast. Manchester’s Dr Colin Richards said that the geophysical survey work carried out by the London and Manchester team has now confirmed that they were not only deliberately erected along the roads, but that their frequency increases the closer the roads are to Rano Raraku.

‘This has to be a way of signifying the increasing levels of importance,’ says UCL’s Dr Sue Hamilton, who said that the volcanic cone at Rano Ranaku, rather than the island’s perimeter, must have been the spiritual and ceremonial focus for the statue makers of Rapanui. This confirms the little-known theory published in The Mystery of Easter Island (1919) by British archaeologist Katherine Routledge, Dr Hamilton said, adding that ‘it all makes sense: the moai face the people walking towards the volcano. Volcanic cones were considered as points of entry to the underworld by the ancient inhabitants of the island. It seems that the volcano was a holy place. It was the birthplace of the statues and people would come to it rather like a cathedral.’