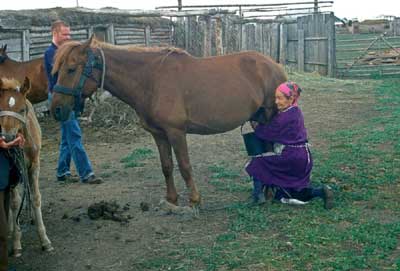 Horses were domesticated for milk and for riding some 5,500 years ago, according to research based on the large numbers of horse bones recovered from excavations at sites associated with the Botai culture (c.3700—3100 BC) in what is now northern Kazakhstan, a part of Asia in which wild horses were once hunted for their meat and where mare’s milk is still drunk, usually fermented into an alcoholic drink called koumiss.

Researchers at the universities of Exeter, Bristol and Winchester (UK), the Carnegie Museum of Natural History (Pittsburgh, USA) and the Kokshetau University (Kazakhstan) compared Botai horses’ bones with those from the region’s wild horses and with the remains of later Bronze Age European horses known to have been domesticated. The Botai horses were much more like the latter than the former, suggesting that selection by physical attribute through breeding was already under way by the 4th millennium BC. Jaw and teeth injuries were also found among the Botai bones consistent with the horses having been bridled and harnessed, possibly for riding or for use as draft animals. Perhaps the clinching evidence came from lipid residues traces in Botai pottery derived from mare’s milk.

Alan Outram, of the University of Exeter, lead author of the paper published in the journal Science announcing the discoveries, said: ‘The domestication of horses is known to have had immense social and economic significance, advancing communications, transport, food production and warfare. Our findings indicate that horses were being domesticated about 1,000 years earlier than previously thought. This is significant because it changes our understanding of how these early societies developed’. •