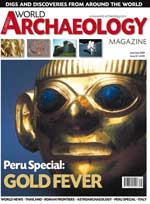 When, in 1911, the American explorer, Hiram Bingham, slashed his way through the South Peruvian forest to rediscover the Inca site of Machu Picchu, the world was rightly entranced. However, as this issue illustrates, there is much more to Peru than Machu Picchu.
Thus, the startled golden face, half child and half ‘space-cadet‘, shown on the cover, was modelled by the Moche; people who lived along the Northern coast of Peru a thousand years before the Inca marched through the land. Found in 1987, it marked the site of the elite tombs of the ‘Lords of SipÃ¡n’ in a little-told story that rivals Carter and Carnarvon’s discovery of Tutankhamun in Egypt. The magazine opens with a major feature on the early 1st millennium AD Moche Lords of SipÃ¡n.
In the wake of these discoveries, an array of other pre-Inca sites along the Northern coastal plain are now under current excavation. All are proving to be extremely archaeologically rich. I took the Northern ‘Moche Route’ to meet the archaeologists and find out more, as further detailed in the Travel Section.
Other highlights in this issue include Charles Higham’s revelation of aristocratic Bronze Age ‘superburials’ at Ban Non Wat in Thailand. Thereafter, David Breeze considers the world’s Roman Frontiers, while David Miles takes us out of this world and into space: archaeology’s Final Frontier.

WORLD NEWS
Dental news on Columbus’ crew; early date for horse domestication in Kazakhstan;
Taming the wild: the orgins of staple foods
The origins of domesticated foods is a major theme in current archaeological research worldwide: in this issue of Current World Archaeology News we look at the results of recent studies in this field, revealing some of the complexities of the subject and the new methods that ar being developed to gain fruitful new insights.

DIGGING DEEPER
News extra from Brian Fagan: A meeting of minds and metors; Tragedy on the Supe River, Peru; One for chocoholics…;Visiting the McClung.

PERU   Gold fever: the tombs of the Lords of SipÃ¡n
Nadia Durrani investigates the unplundered tombs of the Moche culture ‘Lords of Sipan’, who were buried with dazzling splendour in the early centuries AD.

EUROPE   Roman Frontiers: on the edges of empire
The world’s largest archaeological site – the former frontiers of Rome’s great Empire – is to be given World Heritage Site status. David Breeze explains why.

MOON Astroarchaeology: lost in space
The final frontier for archaeological exploration? David Miles examines the effects of human forays into outer space –   and looks at the detritus left behind.

EXHIBITION Galileo: Images of the Universe from Antiquity to the Telescope.
BOOKS Bones, Rocks and Stars: the science of when things happen; Ice, Mud and Blood: lessons from climates past; The Architecture of Roman Temples: the Republic to the Middle Empire; Writing: Theory and History of the Technology of Civilization.