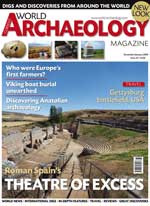 In this issue we present one of Rome’s greatest un-success stories: the extravagant yet impractical city of Clunia in northern Spain.
Two thousand years ago, with the booming Roman political machine behind it, Clunia was made into the administrative capital of the province of Tarraconensis. The main aim of the city was to convey prestige. Among its glut of grandiose structures was the 9,000-seat theatre shown on the front cover of this issue – the largest in all Iberia Despite Oscar Wilde’s famous witticism that ‘Moderation is a fatal thing. Nothing succeeds like excess,’ the opulent Clunia did not succeed. Instead, it fell into disuse.
Why? After all, the city occupied an enviably strategic military position, dominating a vast plateau c.1,000m above sea level. It also had an impressive infrastructure for providing and removing water to rival those in use today. Archaeologists have been working hard to discover more, but what have they revealed?

SPAIN   Clunia: Roman failure, archaeological marvel
The Roman city of Clunia has many prestigious monuments, such as the massive theatre shown on the cover. So why was the city a failure?

ICELAND   Journey to the dead: the Litlu-NÃšpar Boat Burial
An account of the new discovery of a 9th century Viking pagan boat burial – the first to be discovered in Iceland for 40 years.

TURKEY Achaeology of anatolia: 60 years of research remembered
A retrospective on the work of the British Institute of Archaeology in Ankara, as they celebrate their 60th anniversary this year.

ON SITE INSIGHTS: Specialist archaeological insights on the city of Timbuktu from Prof. Tim Insoll.

EXHIBITIONS: A review of the Fitzwilliam exhibition, From the Land of the Golden Fleece, featuring the treasures from Vani in Georgia.

BOOKS – CHRISTMAS SPECIAL: a medley of archaeological books to enrich souls and minds over the holidays.

GREAT DISCOVERIES
Great finds that changed the world
A snapshot of the Australopithecus afarensis, otherwise known as ‘Lucy’.