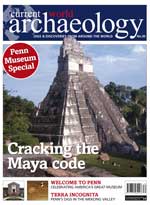 Penn Museum was founded on a grandiose scale in the 1880s, and we open the issue with a review of its rollercoaster history. We then follow with two features on the great civilization of the Maya of Mesoamerica. Currently, they are digging at CopÃ¡n, in modern Honduras where they have uncovered the tomb of the city’s founder, dated to AD 426, precisely as recorded by a Maya inscription erected centuries later by the last king of the dynasty. It has been the recent decipherment of such inscriptions that has catapulted forward our understanding of the Maya. Penn’s Simon Martin describes how the Maya script was deciphered, and tells of his ongoing work on reading their glyphs.
Penn Museum also has a tradition of digging in Mesopotamia ‘the cradle of civilization’, most famously with their involvement in the 1930s excavations at Ur under Sir Leonard Woolley. Today, they are digging the Bronze Age city of Sweyhat in Syria. But why is this site proving to be a Mesopotamian mystery?

Thereafter, we move to the Classical world with a tour of the Museum’s digs at Mt. Lykaion in the Peloponnese. Dedicated to Zeus, this was one of the most famous cult sites of the ancient world. From there, we dive into terra incognita with a revelation of Penn’s intrepid work in Laos, deep in the Middle Mekong Valley.
Finally, Richard Hodges offers his thoughts on the future direction of the museum. Finally, we end with a back-page trip to glorious Troy, where Penn’s Prof. Brian Rose has worked for 20 years.

Through the gates of the Museum:
Penn’s passage through time
PENNSYLVANIA Introducing Penn Museum, then and now.

CopÃ¡n: Tunnelling through the myths
MESOAMERICA Excavations beneath CopÃ¡n have unearthed unexpected information about this powerful Maya site.

From the Director
RICHARD HODGES The Director of the University of Pennsylvania Museum
of Archaeology and Anthropology, considers the Museum’s future.

BOOKS
A selection of the latest titles from the curators, keepers, and conservators at Penn Museum: Native American Voices on Identity, Art, and Culture; Akhenaten and Tutankhamun; The Ancient Maya; The Maya Vase Conservation Project; Archaeology Matters.

Penn’s Prof. Brian Rose takes us to Troy, the site he has excavated for the past 20 years.