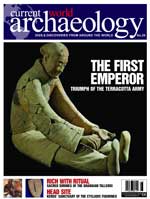 The stark, abstract Cycladic figurines found in the Aegean Cyclades islands have had enormous influence on modern art.   Colin Renfrew has been studying the material since he was a young man in the 1960s. He believes Keros must have been a major ritual centre of the Cycladic civilisation in the early Bronze Age. Could it even have been the seat of the gods to whom tribute had to be paid?
Editor in chief Andrew Selkirk visited Keros this summer, and here he reveals the latest story.
We then move forward in time to the 4th century BC. Fanum Voltumnae was the sacred shrine cum parliament at which the heads of the Etruscan League would meet each year. Now, an archaeological team thinks it has found the site.

The archaeology of African traditional religions – including earth and ancestral cults, animism, and shamanism – has been
largely neglected in comparison to that of world religions, notably Islamand Christianity. However, in 2004 archaeologists began exploring the archaeology of the Tallensi of Northern Ghana, and here they tell of their intriguing finds.

With much excitement, the Terracotta Army has arrived at the British Museum. Here we look at some of the highlights of this blockbuster of an exhibition.
Thereafter, Roger Matthews leaps to the (other) cradle of civilisation with a round-up of the latest archaeological work in Central Turkey.
This is followed by a scoop on Byzantine Butrint from its director Richard Hodges. CWA also welcomes a new columnist, Brian Fagan; originally from England, he has since made his career as Professor at the University of
California at Santa Barbara.
Finally, we end where we started: with prehistoric rituals and a back-page interview on the underground stone circle sanctuary of Xaghra in Gozo.

The First Emperor: A victim of its own mighty success Secrets of the British Museum’s Terracotta Army exhibition.

On the Pilgrim trail to the Holy Land: The changing fortunes of St Gilles and Saint-Guilhem-le-Desert St Gilles in France, at the mouth of the RhÃ´ne, was once a major town on one of Christendom’s busiest pilgrim routes. David Miles considers its changing fortunes.

LETTER FROM AMERICA: Brian Fagan’s ear to the ground
Fagan spans the continents to write on things archaeological that are both entertaining and exotic.

CHRISTMAS BOOKS
Leading archaeologists choose their favourite Book of the Year: Fish on Friday; The Roman Cult of Mithras, the God and his mysteries; Books on Fire: The Tumultuous Story of the World’s Great Libraries; Shadow of the Silk Road; Kaupang in Skiringssal (Kaupang Excavation Project Publication Series, Volume 1 – Norske Oldfunn XXII); The Mind in the Cave: Consciousness and the Origins of Art; A History of Archaeological Thought; The Material Culture of Needlework and Sewing; Edward III’s Round Table at Windsor; Making History, Antiquaries in Britain 1707; Visions of Antiquity, The Society of Antiquaries of London 1707 – 2007; Fall of Troy; The Dig; Feast.

ON SITE INSIGHTS
Simon Stoddart and Caroline Malone tell of their highlights working on the Brochtorff Xaghra Circle, Gozo.