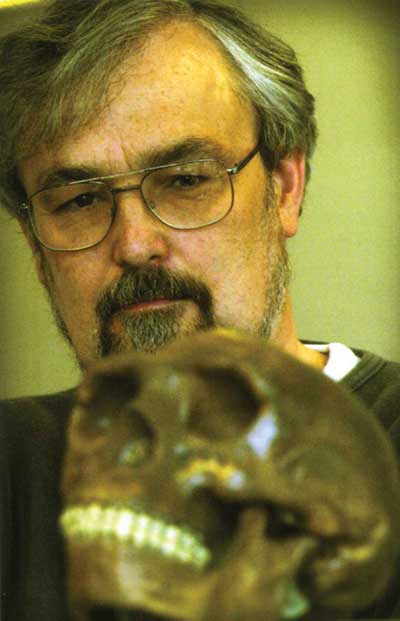 The British Academy has just given a grant of £1m to investigate some of the most fundamental, yet still unanswered, questions about human evolution. Four million years ago, our remote ancestor, the australopithecine named ‘Lucy’, had a brain the size of a chimpanzee. Since that time, our brains have increased three times in size and we are uniquely capable of language. How modern humans became so distinctive remains a mystery. The project, entitled From Lucy to Language, will investigate when hominid brains developed into recognisably human minds – and what changes occurred to enable this to happen.
The funding, awarded to Professors Robin Dunbar and John Gowlett at the University of Liverpool and Professor Clive Gamble at the University of Southampton, will enable archaeologists, palaeontologists, evolutionary psychologists, behavioural ecologists and social anthropologists to collaborate on a seven year programme of research. Their quest will also draw on recent developments in technology and IT, plus advances in key scientific disciplines.
Using the multi-discipline approach, John Gowlett will broaden his investigations into the role that fire played in human evolution. He wants to know whether it was the development of hearths that led to humans developing disproportionately large brains, and the unique capacity for language. The idea here is whether sitting around a fire stimulated cultural and social developments, and therefore language.
On another line of enquiry, Robin Dunbar will intensify his exploration into the connection between brain size of monkeys, apes and humans, and the complexity of social lives. To do so, his team will look at the behaviour of monkeys, apes, and indeed humans who continue to subsist on a foraging economy. The results of these studies will be used to generate new hypotheses about our ancestors, which the archaeologists and palaeontologists will test against the archaeological record.