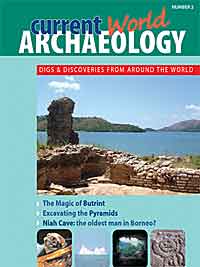 For this second issue, we have a cornucopia of projects from all over the world.

A look at one of the most stunningly beautiful – yet little known – archaeological sites in the world, Butrint; The story of Elizabethan explorer, pirate, business entrepreneur and naval hero Martin Frobisher’s quest for the North-west frontier; A 40,000 year-old skull in Niah cave at Sarawak, Borneo; Prehistoric Ball Games on the Caribbean island of Tortola, Belmont; Zahi Hawass tells how he excavated the pyramids at Gaza.

The Graeco-Roman site of Butrint, is hitherto little known, because it lies in Albania, and has thus been little visited. But since Albania has been free, Butrint has been a triumph, and here we tell the story, not only of the politics behind its rescue, but also an account of what is there and what the current excavations are uncovering.

Excavating the Pyramids Zahi Hawass, Secretary General of the Supreme Council of Antiquities in Cairo gives a first-hand account of his work excavating the Pyramids of Giza. This is based on his new book and tells the story of some of the problems he has faced in looking after the pyramids – and some of the many new discoveries he has made about the pyramids themselves, and about their construction.

The Niah Cave, in Sarawak (which is pronounced with the emphasis on the second syllable: sa-RA-wak), is one of the crucial sites for the antiquity of man in the Far east. It was excavated in the 1950s by the controversial figure of Tom Harrisson, who dug up the skull of a modern human being which he claimed to be 40,000 years old. Was his claim true? Professor Graeme Barker has been leading an expedition to find out, and here is the full story of what he has found: is Tom Harrisson justified?

In 1576, the Elizabethan adventurer Martin Frobisher setout to discover the North-west passage to China, across the barren wastes of northern Canada. He failed to find the passage, and spent most of his time on a fool's search for gold – but the remains of his settlement have recently been excavated by Robert McGhee, who has produced the reconstruction of the hut shown here.

When were the Virgin Islands, in the Caribbean, first settled? Peter Drewett has been excavating an important prehistoric settlement at Belmont, first established around AD 600. Later it was replaced by a ball and dance court, oriented perhaps on the dramatic Belmont Hill, shown here.

When the frozen body called Oetzi the Iceman was discovered in 1994, the body was first taken to Austria, where numerous tests were carried out . Subsequently it was decided that they body had really been discovered 100 yards on the Italian side of the border, so in 1998, the body was transferred to a new museum at Bolzano, in Italy. A host of new research took place, and many new discoveries were made. With the help of the Discovery Channel, we ask what has been discovered? And does this mean that it might actually be a good idea if museums were to change their holdings round periodically?

And finally, David Breeze, the intrepid explorer of Hadrian's Wall, has been exploring the Roman frontiers in other parts of the Empire – and he sends us a postcard, red-hot from the Danube, with this picture of the arch at Carnuntum