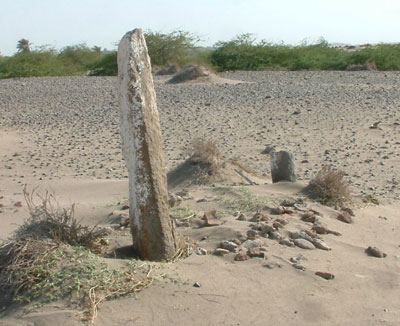 The Tihamah Plain snakes all the way down the western coast of Yemen, past the erstwhile coffee port of Mocha, and on to Aden. Hemmed in by the Red Sea to one side and a mountain range to the other, this long, narrow strip of semi-desert land has the impressive ability to be both devilishly hot and unbearably humid.

In 1982, Ed Keall was the first archaeologist to work here. Even today, few archaeologists venture into its pernicious heat, preferring Yemen’s central highlands with their temperate climes and dramatic ancient sites. So what drew him? He was there, as Director of the Canadian Mission to Yemen, to excavate the once-prosperous Medieval Tihami city of Zabid and explore its surrounding landscape.

Ed’s work in this archaeological terra incognita soon revealed the rich depths of the Tihamah. But quite how rich and quite how deep was unexpected – as he discovered when he took a wrong fork on a dust track to find himself face to face with an astonishing site in the middle of the desert: giant granite monoliths. So, let us hear his remarkable,yet little known, story of discovery.

Pushed by the winds
It was March 1997. We were excavating Fazah, a site that purported to be Zabid’s original port of entry for the Indian Ocean ships. However, the monsoon winds were starting to pick up tremendous strength. We had established a makeshift camp of reed huts and some members of the Canadian team began to show signs of wind trauma, a well-known phenomenon for people living in horrendously unsheltered conditions. Our eyes were gritted with the relentlessly blowing desert sand. After three nights, I decided I was not quite ready to go blind in the cause of archaeology… I opted to abort the mission and return to our base camp at Zabid.

Ferrying the team and equipment back from Fazah to our base, I decided to vary the route home. Blown sand had obscured some of the tracks, and such is the repetitive bleakness of great swathes of this semi-desert zone that it took some time before I noticed I was heading in the wrong direction. However, since GPS instruments had become de rigueur for archaeologists in Yemen (the necessary satellite readings were no longer being scrambled by the US military), I duly parked up on the side of a date plantation to try out my new gadget. Looking around, I suddenly realised that I had been here before, some 15 years earlier, to record the pottery. We were just near the village of al-Midamman. At that point, a local farmer emerged from the palm trees and we began talking.

Reasonably, he wanted to know what I was doing on his family’s land. I attempted to explain the wonders of archaeological science, picking up a piece of pottery in front of me and explaining it was of 15th-century Zabid ceramic production. ‘How do you know this?’ he asked. ‘Well’, I said, ‘you know all about dates, and I know all about pottery.’ He watched as I prepared to leave. ‘So,’ he said, ‘do you want to see the stones?’

Arabia’s Stonehenge
When Salem Hassan led me through the sand dunes and pointed out ‘the stones’ in the distance, shimmering in the desert haze, I remember thinking ‘My god, it’s a Yemeni Stonehenge.’ There before us stood three giant granite megaliths, each around 3m tall, and weighing roughly four tons each. Two more of similar proportions lay fallen. A further, more monstrous megalith, measuring some 8m tall, lay still slanting from the ground. A distance away, many other more slender megaliths, looking more like pillars, lay strewn on the surface of the ground.

Such features are entirely unexpected in this region. No other archaeologists even speculated about their possible existence. Discoveries like this happen only in the dreams of 19th-century explorers. I had simply taken the left fork in a road. I could just as easily have taken the right fork, as the Italian archaeological team did a few years earlier, thereby missing this jewel of the Tihamah.

So it was that I encountered the stones on that March evening. I never say that I discovered them since, to some of the locals, these stones had always been part of their lives. They called them ‘al-Manasib’, literally ‘Uprights’. They believed the stones were transported there by the jinns – those tricksy traditional folklore entities imbued with magical properties. I preferred to see their origin in a site some 300m away from the stones, where, in addition to further fallen uprights, there was a noticeable area of flaked stone, known locally as ‘al-Minjarah’, or the area of ‘cutting’. I assessed it to be the stone-cutting site, or quarry. In fact, I have since discovered that nothing on the Tihamah is so simple. The flakes of stone were, in fact, the result of ‘spalling’ – the disintegration of former uprights in the harsh saline desert conditions.

How to explain this Yemeni Stonehenge? We have since discovered that there were once dozens, if not hundreds, of uprights set across the landscape of al-Midamman. This was an ancient culture that indulged in the setting of giant standing stones. Indeed, once familiar with the culture, one even begins to recognise traces of it in Muslim cemeteries – including the use of recycled pillars from Bronze Age megalith sites to mark the graves of holy men.

Their copious use is all the more striking since (despite my initial thoughts that the stones might have come from nearby al-Minjarah) we now know there is no immediate, consistent, source of stone in this coastal zone. Flood-course boulders do exist; but angular megaliths definitely do not, and there are no signs that the megaliths were hewn from local boulders. So where do they come from?