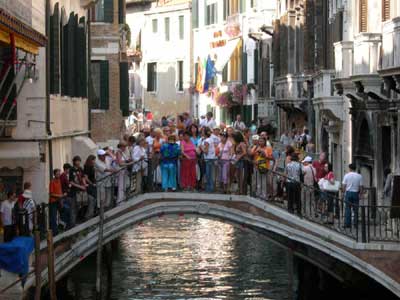 I have been fortunate in my archaeological career to work with many first-rate architects, not only advising on restoration of old buildings but the insertion of new ones into a historical context.

Consequently, this Autumn I was invited to Venice to attend the tenth International Architecture Exhibition, the Architecture Biennale. The event was held in the Arsenale, an historic-building complex, that has been skilfully restored as an exhibition centre.

Venice is full of familiar buildings that have taken on a new lease of life. The original Arsenale – its name comes from the Arabic darsina’a, ‘a house or building for making things’ – has its origins in the 12th or 13th centuries, as a ship repair yard. By the 14th century, the Arsenale was a major ship-building centre, turning out war galleons and merchant ships for Venice’s fleet – the finest in the world according to Philippe de Commynes, the French ambassador in 1494.

The teams of arsenalotti – carpenters, sawyers and caulkers – were so well organised that in 1570 they took only two months to make one hundred galleys in time for the battle of Lepanto with the Turks. At its peak, in this period, two to three thousand men were employed in the shipyard. The Arsenale’s glory days finally came to an end with the Napoleonic Wars and Venice’s occupation by the Austrians. Now it has been reinvented.

From our hotel near St Mark’s Square we walked to the Arsenale past the two solemn lions that guard its entrance – both part of the booty brought back from Athens by Francesco Morosini in 1687. The lions are just one of the historical reminders that the commercially-minded Venetians would happily sack the civilization of their orthodox Christian cousins while cooperating with their Muslim trading partners.

Once we arrived at the Biennale, we found the Arsenale besieged, but this time by men and women dressed in black – the standard garb of the international tribe of modernist architects. We made directly for the 300m long Corderie, the great rope shed, where the main event took place: an exhibition entitled Cities, Architecture and Society curated by Ricky Burdett of the London School of Economics.

This theme was chosen because the human race is scrambling, at increasing speed, into the world’s megacities. By 2050 it is predicted that 75% of us will be city dwellers.

The Corderie – like a long church nave – is not the easiest exhibition space, and it is divided up between the 16 cities that feature in the show. The exhibition consists of impressive photography, graphics and, above all, statistics. There are no models of buildings and the overall impression is that architects are not particularly relevant in the sprawling, organic megacities and shanties of Sao Paulo, Mexico City, Caracas, Istanbul, Cairo and Mumbai.

Indeed, the most vivid and physical images in the exhibitions were Professor Burdett’s attempt to ‘make something beautiful out of data’ as he said. In the central area of the Corderie, blue, pink and white light falls on polystyrene models that indicate the density of population in the 16 featured cities. These look like icebergs or decaying clusters of skyscrapers – London is surprisingly low and slightly sprawling; New York (see picture right) is medium density; but Barcelona, Mumbai and Shanghai have real soaring peaks – representing incredibly dense populations. The models are beautiful, informative and thought-provoking.

As for Venice, a mere 30,000 people now live there. Yet the city is swamped by millions of tourists who are mostly day-trippers. The situation is worsened by the fact that too many people cluster around the honey-pot sites such as St Mark’s and the Rialto area; little attempt is made to encourage them to explore further afield. Tourists and Venice are clearly synonymous – though the relationship is not always a comfortable one. Should entry to historic city cores be rationed, as in the United States national parks?

An additional problem is the way in which the locals do not always benefit from the tourism. Thus, Venice is overwhelmed by floating apartment blocks – otherwise known as cruise ships – that are allowed to tie-up near to the Arsenale. The local hotels, cafes, restaurants and so on thus often see little or no benefit from these ships.

As I witnessed this Autumn, the city desperately needs better tourism management. However, to end on a positive, it appears that at least the microphones used by tour guides seem to have been banned, bringing much more calm to the city. And in order to reach better solutions, I am working on a European Commission research programme, the PICTURE project (or Pro-active management of the Impact of Cultural Tourism upon Urban Resources and Economies), which examines the impact of tourism on historic towns.

Venice may be frustrating but it is never less than beautiful and exhilarating. As historic cities become more accessible to mass global tourism, they desperately need sustainable management. Tourism can be the life blood of historic cities and projects like PICTURE aim to promote its benefits (www.picture-project.com).