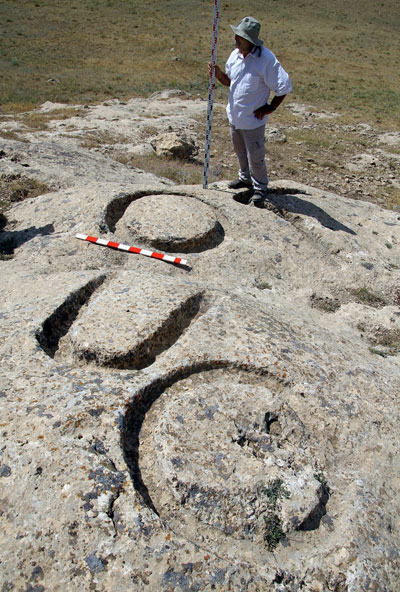 Solving the mysteries at Van

How were some of the first chariots made? Prof. Erkan Konyar of Istanbul University believes he has the answers. His theory turns on a series of strange rock ‘symbols’ found at the early 1st millennium BC site of Van, in Easern Turkey. Nadia Durrani writes.

In the early 1st millennium BC, the Urartians of eastern Turkey rebutted an invasion from the Assyrians, so consolidating their place among the most powerful kingdoms in the Middle East. High on the rocks overlooking the plains, they built magnificent fortresses that contained palaces adorned with frescoes, huge storerooms, and military barracks.

From the 9th to 7th centuries BC, they controlled a vast kingdom that stretched from the Euphrates in the west, Taurus in the south, Lake Sevan in the north, and Iran in the east. But how did this now largely forgotten kingdom do it?

Scholarly consensus holds that the Urartians’ military success was down to their well-made chariots: over and again their art shows fine horse-drawn chariots riding into battle. The predominance of such depictions has even led archaeologists to suggest that the Urartians produced chariots on a near-industrial scale.

This, however, was mere speculation: military chariots had only just been invented, therefore few survive from this era, and not one complete Urartian example is known. Moreover, though the Urartians were the first people to introduce writing to the region, they left no inscription recording how they made their chariots, let alone how many they might have made. So the questions of how they made their chariots, and whether they had the technology to produce them on a mass scale, remained unresolved.

However, while surveying the major Urartian city of Van, Prof. Erkan Konyar of Istanbul University, had an epiphany. Could the answers to these questions
lie in a series of enigmatic rock-carved symbols found at Van – and indeed across their vast kingdom? Konyar began excavating at Van in 2010, and he now believes he has finally unlocked the secrets of the Urartians’ mass-produced weapons of destruction.

The strange marks, known as ‘monumental rock signs’, that drew Konyar’s attention were traditionally interpreted as either some unknown writing system, or as cultic symbols, perhaps designed to ward off danger. Some 19 signs from across their kingdom have been identified, all carved onto horizontal, levelled rock. These include ‘O’, ‘V’, and ‘U’ shapes, sickle shapes, and other geometrical forms. Their dimensions range from between 4-10cm (1.6-3.9in) deep and 10-15cm (3.9-5.9in) wide; while the diameter of the ‘O’ signs ranges between 90-120cm (35-47in), with most measuring 110cm (43in).

But Konyar is now convinced that their meaning is neither ‘cultic’ nor a script waiting to be decoded. Rather, he believes that these ‘symbols’ were moulds, moulds that would have been used to mass-produce standardised wooden wheels and other parts of the Urartians’ chariots. But how? Let the battle for answers begin…

Therefore, he turned to their art. This shows that Urartians used two-wheeled chariots drawn by a pair of horses. The wheels were typically composed of two concentric rings, the outer being slightly thicker. Each wheel had four to six spokes that radiated out from the centre, just as in a modern bicycle wheel; and the two wheels were held in place using U-shaped wheel-clamps. Unlike the (presumably) wooden wheels that have all perished, the wheel clamps were made of metal, and four have been identified from across the Urartian kingdom.

The clamps measure about 13-15cm (5-6in) wide and are around 5cm (2in) thick. Based on their size, and referring back to the art, Konyar projected that Urartian wheels would have been around a metre (39in) in diameter. This seems to be backed up by the few surviving chariot wheels found in contemporary sites elsewhere in the wider region. For example, four Late Bronze Age Egyptian chariot wheels are known with diameters ranging between 88cm and 1m (35-39in). A few Anatolian examples survive from the mid-1st millennium BC – by this time an iron rim was put on the wooden wheel (over which leather would have been added) and this later Anatolian evidence also suggests a 1m (39in) diameter for chariot wheels. For example, the west Anatolian burial site of Balıkesir-Üçpınar contains a good example of a chariot whose metal-coated wheels have a diameter of 1.12m (44in).

When Konyar referred back to the sizes of the ‘O’-shaped rock symbols, they seemed to match the likely dimensions of early chariot wheels. The diameters of the large carved ‘O’s tend to be 90-110cm (35-43in) and 4-10cm (1.6-3.9in) deep. But if he is right that the ‘O’s were wheel moulds, how would this work?

Wheel progress
Though the Turks have long abandoned the chariot, donkey and horse carts continued to be very common until the start of the 20th century. So Konyar consulted recent historical accounts and pre-modern examples to discover something of the traditional methods of wheel construction. He found that cart wheels were often individually carved from wood, on an as-needed basis, using traditional carpentry tools. However, he then discovered that some wheels were produced on a more formal, industrial scale, and these followed a rather different approach.

For mass-produced wheels, the wheel-maker first had to source the appropriate wood: oak was the preferred timber, since it is naturally moist and malleable. The wood was then immersed in a vast cauldron of hot water until it became soft, after which it was inserted into large, round, metal wheel-moulds and clamped into place. Each wheel tended to be made using two or three pieces of wood rather than a single piece that might not bend to shape. Once dry, the timber would then take on the round form of the wheel within the metal mould. After extracting it from the metal mould, the wheel-maker would add spokes, and secure the wheel into place with a U-shaped clamp, making it ready to use.