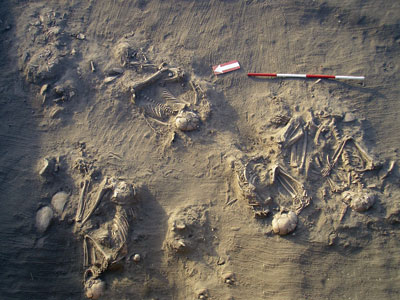 A shocking and sinister discovery confronted us when we arrived for our new season of excavation at Tell Brak. During our absence from this huge Late Chalcolithic urban settlement, the ground had been disturbed, exposing gruesome evidence that this community had been rocked by violence on an extreme scale. We were standing on the site of four mass graves.

All four burials were located within a small sub-mound on the edge of Brak’s Outer Town. They contained the remains of at least 200 individuals, and date to the early 4th millennium BC (middle Late Chalcolithic Period, c.3800-3600 BC) – precisely the time of Brak’s most dramatic urban and economic expansion. These graves could provide us with a rare insight into the region’s turbulent past.

Archaeological and forensic evidence shows that the deaths were simultaneous, and that each of the four burials took place as a single event. As most of the dead are young adults, it is most likely they were the victims of violent conflict. Texts and artworks recording military events – and even describing or representing the creation of mass graves in their aftermath – are known from the 3rd and 1st millennium BC in Mesopotamia; but archaeological traces of such battles and mass graves are rare, even in these later periods. Thus, the Brak burials provide significant and unique evidence for the aftermath of warfare.

The most dramatic mass grave is the earliest: dated to c.3800 BC, it is located on the sub-mound’s south-west edge. So far, more than 450 body parts, belonging to at least 55 individuals, have been found. We estimate that the grave, a long narrow pile about 20-25m long and 3-4m wide, would have contained about 150 dead.

The human remains belong to both sexes, though slightly more males than females. They range in age from late teens through to early 40s, and appear to have been physically healthy before death. If death were from natural causes, we would normally expect a greater age range, with more infants, children, and the elderly.

Nor does the age pattern here correspond to death by epidemic disease, which usually affects everyone in a society equally. Therefore, based simply on the age curve, it seems most likely that the dead found here were victims of organised violence.

Dishonouring the dead
Another surprise for us here was the clear evidence that, before burial, the dead had been left out in the open for between ten days and two months – we await full forensic results to determine the precise time, which depends, among other factors, on the season of death. The skeletons were found in a partial state of disarticulation: skulls were completely separated at the first vertebra, and many limbs, while still partially articulated, were separated from bodies.

However, all the bodies had disarticulated to the same extent, implying that they died simultaneously, and all had been exposed for the same length of time before burial. Distinctive parallel teeth-marks of rodents, and wide puncture-marks made by dogs or jackals on the ends of bones where marrow can be extracted, showed they had also suffered the attention of scavengers. Eventually, the neglected remains had been transported from battleground to burial site. They were dumped in one go, in a contiguous pile, resting on one surface, and covered by a continuous layer of rubbish. Transport was obviously somewhat haphazard, as, significantly, the hands and feet were frequently missing. The chaotic pile also betrays a complete lack of concern for separating the bodies to maintain individual identities, in strong contrast to normal Mesopotamian burial practices.

However, whoever buried the victims enjoyed a ritual feast once the job was done. Animal bones, mostly cattle but also sheep and goat, lie on top of and interleaved with the human remains. The prime-meat cuts chosen and evidence of butchery marks show that these animals were not killed during combat, nor did they die of neglect in the battle’s aftermath; they were slaughtered for the feast.

And it was some feast: at least 25 cattle and 75 to 100 sheep and goats were consumed – though, if estimates of the grave’s size and density are correct, the final total may be several hundred animals. The cattle would have been extremely expensive, yet some portions were discarded uneaten. The feast, therefore, was more than simply a celebratory or commemorative event: it was an opportunity for public, and very conspicuous, consumption.

Violent cycle
This first grave was not the only violent event represented at Brak: our excavations have exposed evidence for at least two more similar events during the next two centuries. About 60m north-east of the first grave, in the centre of the sub-mound, is a second mass burial that, according to the ceramic assemblage and stratigraphy, dates to c.3700 BC.

So far, 14 skulls and associated disarticulated body sections have been identified but, as the grave has yet to be fully excavated, we are unsure how large it is or whether it matches the earlier mass grave in scale. We can see, however, that the age curve of recovered remains was dominated again by 18- to 40-year-old adults. We also see the same consistent degree of disarticulation of the remains; and the bodies had clearly been gathered together and deposited in the same haphazard fashion as before. It looks very much like history was repeating itself.

At the eastern edge of the sub-mound, is the third mass grave, dated to c.3600 BC, where 32 skeletons were recovered together. In this case, they were articulated and mostly complete. It looked, at first glance, like a cemetery with normal graves. However, the ages of dead corresponded to a ‘living’ population cut off in its prime: young adults aged between 14 and 40 years of age. They, too, were all buried in a single layer, in close stratigraphic association, implying that they had died and been interred at near the same moment; but, unlike the earlier two graves, there was no evidence of extended exposure before burial.

Some skeletons displayed evidence of violence – including, in one case, a dramatically twisted neck. And there was no grave pit. Instead, it appears that the bodies were carelessly dropped onto the existing surface, and thinly covered with loose soil, which was then eroded by wind and rain. In many cases, the bones were badly weathered and splintered, and some have been lost – probably to scavenging carnivores.

In ancient mass graves in other regions, signs of violent death would include weapon damage to bones and skulls, and the occasional embedded projectile. Here, however, the amount of disarticulation along with the fact that the weapon of choice tended to be the mace – which leaves less distinctive damage compared to that of swords, spears or arrows – means there is no explicit evidence of violent combat.

We see damage to faces, but this may have occurred during transport. One victim was probably beheaded as the skull retains its atlas (first) vertebra – unlikely in the case of natural decay and consequent separation from the body. Healed dents in other skulls point to survival through a previous battle. These were clearly violent times.