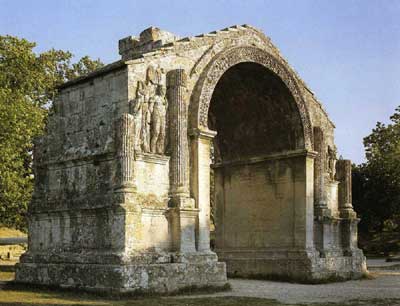 In medieval times St Gilles was a major town on one of Christendom’s busiest pilgrim routes. Today, despite being a World Heritage Site, it is a rather run-down, quiet backwater, with little to draw the tourist or traveller apart from a magnificent Romanesque church. Will the plans to make St Gilles a centre for archaeological research change its fortunes for the better? Or should the town look to the success of its near neighbour Saint-Guilhem-le-Desert? Or are prayers to the blessed Virgin Mary the only answer? David Miles, Chief Archaeological Advisor at English Heritage, writes.

Anyone wishing to revive a run-down town or drag their village from the boondocks could do worse than pray to the Virgin Mary for a visitation. Few people had heard of Knock, in the west of Ireland, before one rainy night in 1879, when Our Blessed Lady, along with St Joseph, St John the Evangelist and a sheep, appeared to fifteen villagers there. Now a vast basilica dominates Knock along with hotels, a heritage centre, a caravan park and, nearby, an international airport. One and a half million pilgrims make their way to Knock each year; encouraged by the imprimatur of Pope John Paul II and Mother Theresa. I first became aware of the Knock enterprise some years ago when I stood next to the queue of pilgrims in the cluttered hall of Stansted Airport. I had joined the rather more secular bunch of tourists waiting by the sign announcing the plane to Nîmes in the South of France. I doubt if many of them realised that they were actually also off to a pilgrim destination, but with a better pedigree. For the Nîmes plane does not fly into Nîmes at all; rather, it lands closer to the little medieval town of St Gilles. In the early Middle Ages, St Gilles was a major port at the mouth of the Rhône, home to 40,000 people (it now has a population of 12,000). It was also the embarkation point for pilgrims to Rome and the Holy Land; gateway for Christians from Italy and Provence tackling the arduous road to Santiago de Compostela. In the 12th century everyone knew of St Gilles: it was a major node on Christendom’s busiest pilgrim routes. These trails were the world-wide-web of medieval Europe – people, ideas, art and architectural inspiration flowed along them.

Today however, despite being granted World Heritage Status in 1998, St Gilles is a slightly shabby, quiet backwater, blessed with few of the trappings of tourism. However, it is graced by a magnificent Romanesque church. According to tradition, St Gilles was a hermit, originally from Athens, who lived in the forest of the Gard, accompanied by a doe. He was injured while protecting the doe from the hunters of the Visigothic King Wanba. By way of compensation the King gave him land to found a monastery. In 1077 the monastery was attached to the Benedictines of Cluny, who were also great supporters of Santiago de Compostela and the burgeoning pilgrim business. A pilgrims’ guide of about 1130 describes the various routes from France to Compostela and mentions 26 shrines that can be visited on the way. About the same time, William of Malmesbury wrote ‘the more grandly constructed a church is the more likely it is to entice the dullest minds to prayer and to bend the most stubborn to supplication’. And ‘open their purses’ he might have added. Pilgrimage, relics, miracles, money and construction were intimately linked. Abbots were frequently praised for their building efforts and for putting into practice the words of David ‘Lord I have loved the beauty of your house and the place where glory dwells’. (Psalm 16:8)

Not everyone approved of such architectural and artistic extravagance. The austere leader of the Cistercians, St Bernard, could have been referring to the great façade of St Gilles when he railed against contemporary sculpture: ‘those ridiculous monstrosities … those extraordinary deformed beauties and beautiful deformities’. While the Cistercians sought remoteness ‘far from the haunts of men’, the Abbey of Saint Gilles dominated the market-place of a thriving town. This engagement with urban life is reflected in the character of the church’s magnificent façade and its great frieze, one of the masterpieces of Romanesque art.

From about 1020 there was a fundamental shift of direction in western European architecture. Buildings emerged with an expressive power not seen since the days of the Roman Empire. These were buildings inspired by Rome, even cannibalising the material of Roman ruins, but not limited to mere replication. With increasing prosperity patrons were willing to pay for impressive buildings and the quarrymen, stonemasons and sculptors developed the skills and infrastructure to supply the demand.

At Saint Gilles local sculptors and masons had clearly studied the Roman ruins which still stood nearby, such as the amphitheatre and temples of Nîmes, the triumphal arch and the mausoleum of the Julii in Glanum. But the Saint-Gilles sculptors introduced an urban liveliness into their frieze depicting the passion of Christ. The figures seem to plot, gossip, gesture and transact like a bunch of market traders, all against a background of arcades which conveys a sense of the urban forum. As Christ is embraced by Judas, they are both observed by a most unclassical mob of medieval characters who exude an almost Rabelasian sense of life. So it is a pity that the French Revolutionary iconoclasts took a hammer to many of them and demolished the end of the church with its ambulatory and apsidal chapels, designed to allow the flood of pilgrims to flow around the building. Late this summer, I visited St Gilles on a Sunday morning just as the congregation gathered for mass. Local gardians, the cowboys of the Camargue, arrived wearing their floral shirts and black hats. Unfortunately they didn’t hitch their white horses in the market place. They were joined by a large clan of Roman Catholic gypsies, who were there for the four baptisms that took place at the end of the mass. At a different time of year, on 24th May, the gypsies would have joined the pilgrims at nearby Saintes-Mairies-de-la-Mer where the statue of their patron saint, the black woman Sara the Egyptian, is paraded. During the Saint-Gilles mass most of them preferred to pop out regularly for a fag and a phone call.

Certainly, St Gilles is not a wealthy place. The local population includes immigrants from Spain and North Africa who work in the fertile fields of the Rhône delta but relatively few tourists visit. Therefore the local authorities, the French Ministry of Culture and the E.U. have got together to launch a 10 million euro project Saint-Gilles Demain (Saint Gilles Tomorrow). Local councillor Samuel Serre said ‘Our patrimony here is largely under-exploited, so we aim to rehabilitate the ancient town centre, around the abbey and create more dynamic economic and cultural tourism. But also make at Saint Gilles a centre for archaeological research’. Yet I quite like Saint Gilles as it is. Thanks to the silting of the Rhône delta Louis IX shifted the main port south to his new foundation at Aigues-Mortes. The town of St Gilles never recovered its former dynamism, and except for the attention of unsympathetic revolutionaries, is remarkably well-preserved.

Ironically to see dynamic tourism at a Romanesque abbey, just head about 40 miles west on the pilgrim route known as the Via Tolosana to Saint-Guilhem-le-Desert. Saint-Guilhemle-Desert is today officially listed as one of the most beautiful villages of France and as its name indicates its monastery was built ‘far from the haunts of men’, in the rugged limestone gorge of L’Herault, in complete contrast to the medieval urban bustle of Saint Gilles.

The founder Guilhem or Guillaume – who made his unusual name popular in Normandy and hence in England (as William) – was a worldly general and aristocrat. He was also a cousin of Charlemagne, frequently married and an enthusiastic slaughterer of Gascons, Arabs and Slavs. In 806 he retired to a monastery and rather wisely, as an ambitious abbot, persuaded his cousin to provide him with a fragment of the True Cross, which is today held in a small shrine.

Relics are not so much in fashion as in the days when a monastery like that at Peterborough in East England could proudly boast that it possessed St Oswald’s right arm ‘more precious than gold’, some of his ribs, the soil where he was martyred, several fragments of Christ’s manger and swaddling clothes, a scapula of one of the Holy Innocents and the leftovers of the loaves Christ fed to the five thousand. The Pope, of course, possessed Christ’s foreskin; but so did the French monks at Charroux. Edward Gibbon, not a fan of Christianity, called this medieval sharing out of body parts a ‘pernicious innovation’. Gibbon might have approved of another medieval innovation that is gloriously displayed at Saint-Guilhem -the cloister. This would be even more magnificent if the best bits had not been flogged off to New York. In 1906, the American sculptor George Grey Barnard bought a large group of medieval sculptures, including the Saint Guilhem pieces. From these he created what has been called ‘the most important collection of French medieval art outside the country’. In 1922, New York’s Metropolitan Museum acquired Barnard’s bought collection, thanks to a donation from John D Rockerfeller. It is now the centrepiece of the Cloisters Museum at the northern end of Manhattan overlooking the Hudson River.

It has been a truism for a thousand years that relics follow power and cash. The only alternative is to pray to the Blessed Virgin.