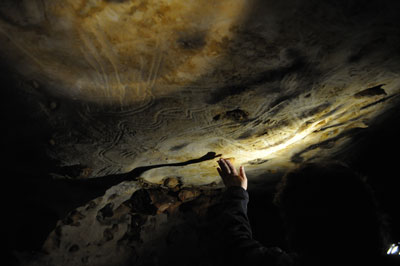 For the past 11 years, Leslie Van Gelder has been untangling the lines drawn during the Upper Paleolithic on the walls of Rouffignac and Gargas caves, in the Dordogne, France. These lines are called ‘finger flutings’ – lines drawn with fingers in the soft moonmilch or clay of cave walls and ceilings. Leslie’s late husband, Dr Kevin Sharpe, began the study of finger flutings in Koonalda Cave in the Nullabor Plain of Australia in the 1970s. It was his passion for making meaning out of these enigmatic lines that led to their work in the French caves, and ultimately helped them better to understand cave artists. Today, Jessica Cooney, a PhD candidate at Cambridge University, and Leslie continue this work with the assistance of their Rouffignac guide Frédéric Goursolle.

Rouffignac is an enormous cave system, stretching nearly 10km2 in total area over multiple levels and chambers. Though known and visited for many centuries, as is evidenced by both written records and the graffiti that cover many of its walls, it was only in 1956 that its prehistoric art was first recognised and authenticated. Known as ‘The Cave of the Hundred Mammoths’, Rouffignac’s walls are alive with black manganese drawings of mammoths, horses, ibexes, and bison. Although this art is dated to c.13,000 BC, they may be even older as claw marks scouring some of it have been attributed to a bear that was extinct 20,000 years ago, and some animals here are of species belonging to the earlier period the earlier period. On the softer walls and ceilings appear beautifully sketched mammoths and horses, anthropomorphic faces, and a single gentle face of a bear, drawn with flint tools and fingers.

Finger fluting is found in every chamber where there is figurative art – many chambers have none. And in every chamber with finger flutings, there is at least one, but usually two or more, that indicate the presence of children. Some of the flutings appear ‘organised’, with clear upright units and space around them, reminiscent of writing in our own time period. Others have a free-flowing quality, suggesting that the creator was moving either wrists or hips or both in the creation of the flutings. In only one instance do lines run along the side walls, perhaps to help one find one’s way in the dark. In fact, over the years, they were amazed by the absence of such lines, which suggested that the people who explored these caves did so with great confidence, as they would have had to navigate undulating clay floors pocked with bear pits, using only grease lamps for light.