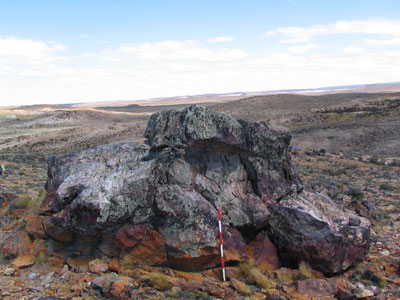 As the ice sheets receded from the beautiful and diverse landscape of Late Pleistocene Patagonia, the first human societies began to arrive into this hostile environment: to the west lie the Andes with glaciers, woods, and huge turquoise lakes; in the east is the vast Atlantic Ocean. Just 75km from Puerto San Julian, towards the north-east, is the Central Plateau, where, millions of years ago, volcanic activity shaped the landscape that today consists of high basalt plateaus, petrified forests, and deep ravines. It is here, in the caves and rock shelters at the bottom of the ravines, that some of the oldest evidence of human life in the Americas has been discovered. Their vibrant rock paintings give a unique insight into their lives and the wildlife around them, while the evidence of flint tools bears witness to the sophisticated techniques employed both in making the tools and in their use. But the sites themselves were used for distinctly different purposes: so, what does this tell about the life-style choices of Patagonian Ice Age man?

The three sites – Casa del Minero, Cueva T˙nel, and Cerro Tres Tetas – date to between c.11800 BC and 9500 BC, a period that corresponds to the last stage of the Ice Age, at the end of the Pleistocene period. Casa del Minero and Cueva T˙nel are situated 17km apart on the estate of a ranch named La MarÌa; Cerro Tres Tetas lies a short distance away on a separate ranch called San Rafael.

Hunting
Evidence from the sites indicates that the weather at this time became comparatively warmer and more arid, with rainfall at less than 200mm each year. Shrubs started to replace tender grasses, supporting a wide variety of animals, some that have since become extinct. At Cueva T˙nel, archaeologists found the remains of Panthera onca, a jaguar, and Hippidion saldiasi, a small horse. The fact that horses existed so long ago in this area amazes many who live in Patagonia now, as the horses bred there today were brought to the Americas by the Spanish in the 16th century. At Casa  del Minero, lithic remains associated with hearths were found with a variety of fauna, including the guanaco (a camelid) and the grey fox, both of which are still found there today. But the remains have also been found of some now extinct species: a type of fox, Dusycion avus, and two distant relatives of today’s guanaco, Hemiauchenia paradoxa and Lama gracilis.
Interestingly, however, it would appear that the extinction of any species in the area cannot be blamed on the sudden arrival of humans, as most of the animal remains found on these three sites belong to animals that are still around today – particularly the guanaco. But there is no doubt they did hunt all species, and for a variety of uses: in Cueva T˙nel a femur of the extinct Lama gracilis has been deliberately broken – either to extract the marrow, or to make a bone hammer for softening the meat – and then flaked; and there is evidence of guanaco bones that have been shaped as awls to perforate hides.