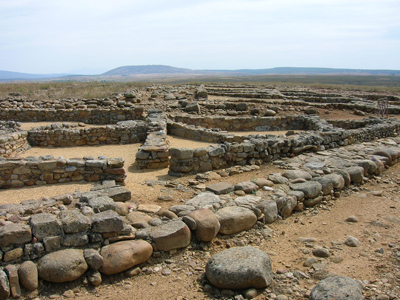 Spain is a hard place to fight over. It is a great square mass of land divided up by mountain ranges and poorly served by navigable rivers. In summer, it becomes a boiling furnace. In winter, men freeze in plummeting temperatures, and upland tracks are turned to rivers of slime by rainstorms. Spanish irregulars rooted in this terrain would one day consume the armies of Napoleon. That is why ‘guerrilla’ is a Spanish word. But it was the Romans who first discovered the grim military reality of the Iberian peninsula.

Did Napoleon’s marshals read Appian’s Iberica, his ‘Spanish Wars’, in which he recounts the entire 200-year sequence of Roman military attempts to subjugate the Celtiberians? This is our main source. From it, and the archaeology, we learn that the peninsula was a patchwork of peoples and tribes with an Iron Age culture, each group centred on a hillfort that was girded by defensive ramparts of dry-stone masonry and mud-brick. The ancients described the inhabitants as ‘Celtiberians’, a fusion of native Iberians and incoming Celts from the north, and there is indeed much archaeological and place-name evidence to support the idea of a hybrid culture spreading across Spain from the Pyrenees.

The Celtiberians had a strong military tradition fostered by endemic tribal warfare and an impressive array of iron weapons. Their heavy infantry fought mainly as swordsmen, using either the curved falcata or the straight-sided gladius, both cut-and-thrust weapons designed for slashing and stabbing. They wore little or no armour, but carried large oval body-shields, and may also have been equipped with javelins. Certainly, there were Spanish light infantry so armed, their javelins including a barbed variety made entirely of iron, and a short pilum, which had a narrow head and a long thin metal shaft designed to penetrate shields and armour.

The Spanish way of war involved rapid movement over rough terrain, and ample use of surprise, ambush, and hit-and-run. The dense-packed phalanxes of armoured men favoured by the Greeks – and copied to some degree by the Romans in their early armies – were of little use against such enemies. Spain was to prove a new university of war for Romans trained in the Hellenistic tradition.

During the Third Spanish War (154-133 BC), Numantia became the epicentre of the struggle between Roman and Celtiberian. Again and again, Roman armies marched on the great hilltop city, only to be defeated by a brutal combination of strong fortifications, determined resistance, logistical breakdown, and steady wastage due to cold, hunger, disease, and guerrilla attack.

It was between 1905 and 1912 that the archaeological evidence of this intractable struggle was first investigated. The excavations were led by the German scholar Adolf Schulten (1870-1960), an ancient historian and archaeologist who worked extensively in Spain between 1902 and 1933. Schulten’s recording and publication were meticulous, and his attempt to interpret field results in the light of ancient texts was a very significant and long-lasting contribution to knowledge of the Roman Republican Army.