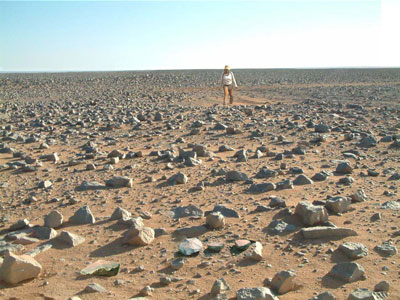 ‘Expect the unexpected’ is a good maxim for any archaeologist. But nothing could have prepared Terry Hardaker and his team for their spectacular find as they explored the ancient land surfaces in a remote part of western Namibia.

One hot morning, the team from the Namibian Palaeolithic Field Research Programme (NAMPAL) was searching a site close to the main Zebra River. At the edge of the site is a gully, filled with dense thorn scrub, of a kind that you would not even wish your worst enemy to be dragged through. With some reluctance, one of the team-members braved the thorns and entered the steep rocky gully, and there it was: a Palaeolithic ‘mandolin’.

The ‘mandolin’ is quite unlike any other Palaeolithic artefact recovered so far. It joins the ranks of rare, exceptionally large Palaeolithic artefacts from Africa – and occasionally from Europe – that are the stuff of archaeological legend. So-called because of its uniquely slender shape, the 344mm-long mandolin seems to have started life as a cleaver, or chisel-ended handaxe. But there the similarity ends. It was then thinned along the sides to create a ficron – a long, narrow, two-sided (or bifacial) handaxe with concave edges.

But let us begin at the beginning. Lying on the ground in almost all arid zones around the world are some of the greatest Palaeolithic treasures to be found: countless millions of stone artefacts, some of which belong as far back as the Acheulian, over a million years ago. It seems incredible that these tools are still lying unburied and undisturbed after so long. How is it that archaeologists have not paid more attention to them?

First, they are usually in remote, inaccessible places, where permission to search is laced with red tape and takes years to secure. But, more importantly, such surface finds are too often dismissed as having nothing serious to offer, because they do not lie in ‘context’ – ie with other remains such as pollen, bones, vegetation or charcoal – and thus apparently cannot be dated.

Not so, says the Namibian Palaeolithic Field Research Programme (NAMPAL) team, a small group of geologists and archaeologists from the UK, the Netherlands, Egypt, South Africa, and Namibia. Based at Zebra River, astride the Great African Escarpment, they found that artefacts still lie in clusters where they were dropped, and, what is more, that they can be dated relative to one another. The loss of context is more than compensated by the sheer size of the archaeological canvas.

The NAMPAL Study Area measures 80km by 110km (50 miles by 68 miles). In eight seasons, fieldwalking has covered just a fraction of it. One of the greatest advantages of surface archaeology is that it exposes both the artefact scatter-patterns and the topographic environment on which they were laid. The team learned from geomorphological studies carried out by Professor Nick Lancaster, of the Desert Research Institute of Nevada, that these landscapes have hardly altered in the last half million years, owing to geological stability and the consistently dry conditions. A process called deflation, which blows away smaller particles, concentrates stones and artefacts on the surface. As a result, we can see how early humans chose their living spaces in relation to the topography, water resources, game-migration routes, and lithic raw material sources. Indeed, what we see now, they saw then.

No rolling stones
Proving that artefacts lie largely in situ was easy. Lumps of stone are quite difficult for nature to shift, especially on flat land away from stream beds, which is where most Palaeolithic societies chose to live. Here, heavy rainfall can only move dust, sand, gravel, and the smallest artefacts. Mechanisms that might move the larger ones – animal kicking or burrowing, root growth, frost heave, human agency – act randomly as very slow dispersants at best. So once dropped by man, they tend to stay put.

The issue was finally settled through two observations. First, natural forces cannot accumulate dense clusters of artefacts containing specific archaeological signatures; and second, some of these clusters still lie on the tops of isolated mesas. If dynamic processes had been at work, over time these tools would have dispersed from the hilltops.

The problem of dating is more challenging, but a partial solution was found. Loss of context robs surface material of its best means of dating. However, there is still one timepiece ticking on the surface that will allow the relative dates of artefacts to be measured: weathering.

Weathering acts constantly on all surface material, slowly eroding it through chemical and physical processes caused by rain, wind, heating and cooling, frost, and elements in the soil. When a stone tool is manufactured, its edges are sharp. Left on the surface for thousands of years, weathering erodes these sharp edges, making them progressively more rounded. The more rounded the edges, the longer the tool has been exposed to the elements. A digital program, called the Edge Test, was created, and a method of measuring the edges devised, to provide a detailed quantitative analysis of relative age based on loss of sectional mass from artefact edges.

The archaeologists were then able to pin these ‘floating’ relative dates to absolute date ranges from the typology of the artefacts. For example, if they were testing a Levallois core, they knew from excavated sites that this technology begins no earlier than 350,000 or 300,000 BP, and runs in Namibia until perhaps 180,000 BP. So the floating date is placed in an absolute time-frame.

By testing hundreds of artefacts in this way, a picture of the settlement chronology in the Zebra River area was built up. It showed that the earliest humans probably did not arrive here much before 400,000 BP. They were Homo erectus of the Early Stone Age (ESA), or Lower Palaeolithic, makers of Acheulian handaxes. About 100,000 years later, Middle Stone Age (MSA) peoples moved into the area. They were not handaxe makers, but preferred the so-called ‘prepared core technology’ of Levallois cores, flakes, blades, and points.

But something happened after 200,000 BP that seems to have driven all human populations out of the area, for we find no more stone tools until those of modern cave-dwellers of 5,000 years ago. It may be that cooling conditions about 180,000 years ago (associated with the onset of Marine Isotope Stage 6) caused the region to become just too arid to support human groups.