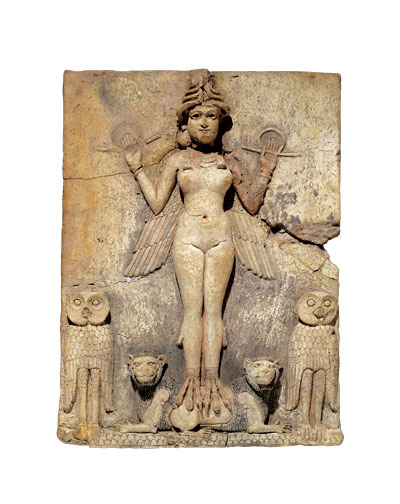 Wives, mothers, priestesses, and deities – there are plenty of depictions of such women in the art of ancient Greece, Rome, Egypt, and the Near East, but many would leave you cold. Perhaps because they are idealisations, they lack the vital spark that stops you in your tracks and demands attention. On the other hand, ‘bad’ women have a very different appeal that seems to bring out the creative side of the artist, and some of the most compelling depictions of women in ancient art are of those who do not conform to social norms.

A particularly arresting example is the Near Eastern relief which the curators at the British Museum have dubbed the ‘Queen of the Night’ after the character in Mozart’s opera The Magic Flute. The poetic name disguises the fact that we do not know a great deal about who she is or what she represents. For many decades she was known more prosaically as the ‘Burney Relief’, after the London antique-dealer Sidney Burney who acquired it in 1935; the British Museum had declined to buy it in 1924, from a Syrian dealer who would only say that he had come across it in southern Iraq.

The imprecise provenance led many to question the authenticity of the terracotta relief, though thermoluminescence tests have since confirmed that it was probably made around 1765 BC. Traces of paint have been analysed and used as the basis for recreating the original appearance of a strikingly colourful figure, while stylistic comparisons with other examples of Mesopotamian art of the period have enabled scholars to make informed guesses about her identity.

At first sight, this curvaceous naked woman appears to belong to one of the oldest and most enduring themes in the depiction of women in ancient art: the sex goddess, represented by the naked female figure, often with exaggerated breasts, belly, thighs, buttocks, and/or pudenda, all of which our modern age tends to interpret as representing fecundity.

There is much more to this complex figure, however. Her legs end in the talons of a bird of prey, similar to those of the two owls that flank her, and she stands on the backs of a pair of supine lions. The rods and rings she holds in her hands are symbols that, in other sculptures of the time, are associated with divinity and justice.

She might therefore be the goddess Ishtar, the Mesopotamian goddess of sexual love and war, one of whose attributes is the lion. On the other hand, the owls and the moon on her head-dress and the background, originally painted black, all suggest she could be Ishtar’s sister and rival, the goddess Ereshkigal, ruler of the Underworld.

But neither goddess is ever depicted nude in Mesopotamian art, so a third candidate has also been proposed: the female demon Lilitu, whose name is very similar to that of Lilith, named in the Dead Sea Scrolls and in early Jewish writing as the first wife of Adam. In Jewish mythology, feisty Lilith was created from the same earth as Adam and at the same time as him, and she refuses to submit to his dominion, claiming that they are thus equal. Not surprisingly, Lilith has been adopted by equal-rights campaigners as the archetype of the modern independent woman, though she is an ambiguous emblem, for while her attributes include a voracious sexual appetite that causes male impotence, she also makes it difficult for women to give birth, as if she were doing her best with both sexes to prevent the increase of the human race.

None of these explanations quite gets to the root of why the Queen of the Night is such a striking work of art – so much so that the British Museum trustees changed their minds in 2003 and decided to buy this spectacular terracotta plaque to mark the museum’s 250th anniversary. Perhaps it is because the figure portrayed in the statue exudes a sense of self-esteem when so many women in ancient art seem to exist only as adjuncts to men.

She dates to a time when the rights and freedoms of women were severely constrained: from about 1750 BC, the Code of Hammurabi records 73 regulations governing the conduct of women, including the death penalty for adultery. Perhaps the Code does not tell the entire story, however, for while most women in Mesopotamian society were, to all intents and purposes, slaves, women retained certain rights when they married, such as control over their own property; and there is evidence from contracts and legal documents of the 3rd millennium BC that some women could buy and sell houses, become involved in court cases, and act as guarantors for loans.

Cuneiform tablets of the period tend to be dry accountancy records, but just occasionally it is possible to glimpse real human lives. Clay tablets from a trading colony that burnt to the ground in that same year – 1750 BC – include letters written by wives to their merchant husbands, temporarily residing in the colony, informing them of transactions carried out during their absence from home. From these, it is clear that women were partners in the business, free to bargain in the marketplace, buy wool, hire weavers, and negotiate with donkey drivers for the carriage of the finished textiles. The fact that the weavers they hired were also women suggests that there was a free market in labour that some women were able to exploit.

The ancient Greek historian Herodotus would not have approved of such behaviour at all. Indeed, in his Histories (2:35) he accuses the Egyptians of having turned upside down ‘the ordinary practices of mankind’ because ‘women go to market and engage in trade, while men stay at home and do the weaving’.

In fact, this passage probably reveals more about his attitudes to women than it does about ancient Egyptian society. Greek authors as a whole tend to be a misogynistic bunch, often characterising women as weak and unable to control their emotions, destined to be ruled rather than to rule, and hence legally defined as minors and denied participation in civic life. After all, it was Sophocles who issued that famous dictum in the 5th century BC that ‘a woman should be seen and not heard’.

And yet, it seems that the depiction of women in art exists explicitly to contradict or challenge such social mores and state laws. The views of Greek philosophers on the inferiority and flightiness of women does not seem to have been shared by artists and sculptors, nor by the gods, judging by the frequency with which women are depicted as priestesses.