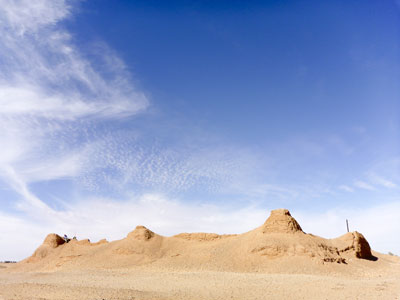 While the Garamantes did not leave magnificent monumental cities like Lepcis Magna, Sabratha, or Cyrenaica, a 15-year programme of survey and excavation is providing dramatic archaeological data to show that this ancient people was as sophisticated, complex, and technologically advanced as their illustrious neighbours to the north.

Their society was based on oasis agriculture and sophisticated underground irrigation systems, called foggaras (see CWA 9), enabling them to grow crops and graze cattle in hostile, arid conditions. Their settlements were permanent towns and villages with complex mudbrick architecture and monumental structures; they traded extensively with both the Mediterranean and Sub-Saharan Africa; they even had a written form of their Berber language; and, their lifestyle was supported by the same technologies that characterised contemporary Mediterranean civilisations – agriculture, metallurgy, and textile and craft production.

State-builders
We know from evidence collected by Charles Daniels in the 1960s from the hillfort site of Zinkekra that the Garamantes evolved into a proto-urban society by the late 1st millennium BC. Later, in the 1990s, excavations at Old Jarma by David Mattingly provided proof that a true urban centre, with monumental buildings, streets, and houses, emerged here in the latter centuries BC and early centuries AD. However, few other sites have been identified as part of the same settlement system.

Now, surveys in the area around Jarma by David and his team indicate there are other settlements in the oasis zone – albeit difficult to detect. Here, they take up the story.

Surviving landscape
The remains of extensive cemeteries and numerous underground irrigation systems – the foggaras – gave us clues that a major Saharan polity existed here. But the many villages and gardens that had once been supplied with water from these long abandoned irrigation works were hidden by continued oasis agriculture. Our investigations focused on a valley called the Wadi al-Ajal, roughly 1,000km south of Tripoli, where we found clear evidence of the surviving Garamantian landscape.

Our mapping of parts of this valley – for instance, an area known as Taqallit – recorded many previously unrecognised settlements adjacent to the delivery points of the foggara systems. Where the mother wells of the foggaras were sunk close to the escarpment, we noticed that there were extensive and very dense Garamantian cemeteries. We believe these cemeteries may have been placed there to advertise communal claims to the water that was being ‘mined’ in these locations.

Modern development and windblown sand have obscured the morphology and detail of many of these settlements, so while our research in the Wadi al-Ajal successfully identified many Garamantian settlement sites, we still wanted to learn more about their character. This we were able to do by using high-definition satellite imagery, uncovering incredibly well-preserved settlements in a previously unexplored area of the Fazzan, about 100km south-east from Jarma around the town of Murzuq.

Agriculture has contracted quite dramatically in the Murzuq region (an area of c.600km²) and the satellite images document clear evidence of settlement plans, garden and field systems, and the irrigation systems that fed them.

So far, we have identified 92 substantial abandoned mudbrick villages. At the centre of almost every site is a square mudbrick ‘castle’ – or qasr (pl. qsur). Sometimes they are preserved only as a large mound, but often the corners and side towers, gates, internal rooms, and an enclosing ditch or moat are still visible. The largest of these are up to 32m (105ft) across and still stand 4m-5m (13ft-16ft) high.

Around the base of the qsur are some of the finest examples of Garamantian houses. Most are rectangular in shape, with the short end facing south, a large central courtyard, and rooms at the northern and southern ends. The most impressive villages have a further enclosure wall with towers around them, and are the size of small towns. Other features include possible crop-processing areas, houses with large courtyards, alleys, and squares within the settlements, and associated cemeteries.

The exceptional quality of the imagery and the preservation of the standing remains have allowed us to map out not just the morphological detail of individual sites, but also adjoining blocks of archaeological features up to 4km² in size. Hundreds of fields are visible, each containing at least one collapsed well, and with a network of tracks and pathways linking them together. This all suggests that the Garamantian landscape was extremely well ordered, with high levels of enclosure of settlements and gardens.

Pottery recovered during field visits belonged exclusively to this Garamantian period – and, significantly, no Islamic material was found – suggesting that this was a time when settlement and farming of the desert reached its peak. Moreover, the scale of these finds challenges previous assumptions that ancient population levels were low in the Saharan oases.

Indeed, demographic reconstructions for the Murzuq region far exceed the number recorded in the early 20th-century censuses and, if typical for the whole of Garamantian Fazzan, suggest population levels may have reached 50,000-100,000 people at its peak.

The Royal Cemetery
Understanding the living often comes from investigating the way they treated their dead. Once again, we were impressed by the sophistication of Garamantian burial practice. One of the burial grounds we excavated, close to Jarma, is particularly splendid.

Dubbed The Royal Cemetery of the Garamantes, this monumental Late Garamantian cemetery has rectangular stepped tombs fronted by massive offering tables and stelae. The so-called Kings’ Cemetery sits to the west, with the Queens’ Cemetery to the east. Although there is no clear proof that the burials were royal, the stepped monuments are the largest yet recorded in Fazzan, and their proximity to the Garamantian capital of Old Jarma make this an inviting hypothesis.

Finds from past investigations supported a 4th-6th century AD chronology, and included glass vessels, lamps, silver, glass and carnelian beads, fragments of textiles, handmade incense burners, and African Red Slip tablewares. However, the records were very incomplete, and many questions remained unanswered. More urgently, we became aware that the area is threatened by the expansion of a modern aggregates quarry. Therefore, in January 2011, the Desert Migrations Project set out to resolve some of the mysteries of this high-status site.

The tomb selected in the Kings’ Cemetery was covered by a huge mound of rubble 16m x 11m (52ft x 36ft), up to 1.6m (5ft) deep, attesting to the impressive original height of the structure. Removal of the rubble revealed the finely plastered remains of a large stepped tomb, over 36m² (387ft²) in area, and originally still standing to a height of 1.4m (4ft 6ins).

The internal chamber was lined with rough coursed stonework. The top course was painted with red ochre – a previously unknown and exciting discovery. On the eastern side of the tomb that survived to a depth of 2.8m (9ft) from top to bottom, the depression from a robbed offering table was visible. The offering table would have been 2m (6ft 5ins) long and 0.5m (1ft 6ins) wide, perhaps standing 0.5m (1ft 6ins) deep.

Two pairs of two-point stelae and a displaced singe-point stele were probably part of an original line-up consisting of two pairs flanked by single-point stones. The tomb had been looted some time in the past, but excavators did retrieve disturbed finds both in the chamber and outside the tomb that dated it to the late 4th century AD. These artefacts included: five plain silver rings, fragments from incense burners with incised and painted decoration, 12 astonishingly large oblate or spherical carnelian beads, three ostrich eggshell beads, six copper-alloy studs, at least three glass vessels, elements of carved wooden furniture, and African Red Slip ware. Clearly, these were splendid burials.