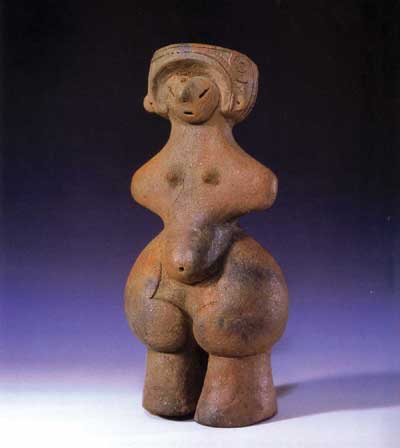 The Jomon Culture in Japan is one of the strangest Prehistoric cultures in the world. It was extremely long lived, beginning in the Upper Palaeolithic around 13000 BC and lasting down to around 800 BC, but they never developed agriculture but remained based on foraging for nuts and fish. Nevertheless it was surprisingly sophisticated, producing some wonderful pottery and figurines as well as living in some very extensive villages.

Numerous clay figurines are found in the Jomon period, like the one show on the front cover (CWA #11), and also this superb standing figure 45cms high. The head is indistinct but has an elaborate headdress or helmet, but the flared jeans somehow look very modern. Were these gods or ancestors?

The Jomon people never developed agriculture but chestnuts and acorns became a major food source. However, many nuts need processing to remove the tannic acids and this large hearth may have been an ash making facility to remove the acids from the nuts.
Despite not developing agriculture, the Jomon people nevertheless developed large villages, such as this one from Namesaka, where a complete village was excavated with circular pit dwelling set round a central plaza.

——————————————————————————–
How to look beautiful in Jomon Japan: have some teeth removed! Here we see some of the more popular forms of tooth ablation. Presumably this marked out tribal differences so that you could see at a glance to what tribe anyone belonged. Was this some sort of Coming-of-Age ritual, a jolly way of celebrating your 21st birthday?

One of the largest excavations ever to have taken place in Japan, or indeed anywhere in the world. Two Jomon settlements were discovered on a low ridge in the middle of Lake Biwa. A coffer dam was placed around and they were excavated on the bottom of the lake.