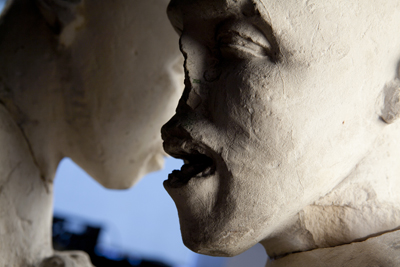 Standing 67cm high, the limestone figures are intriguing and haunting, with their elongated skulls, their slack mouths, and their painfully thin limbs. Squatting naked opposite each other, one rests a hand on the arm of the other. Traces of red pigment hint at decoration; small streaks of green paint are probably a more recent, possibly accidental, addition. Graffiti, in a language as yet undeciphered, has been carved onto the base.

Fake or genuine antiquity? The jury is out. Now, the University of Concordia in Montreal, Canada, which acquired the sculpture in 1999 and where it has been on public display earlier this year, is determined to find out. Little is known of its origins other than that it was brought over to Canada to be included in an exhibition of Egyptian artefacts at the Galleria Ars Classica in Montreal by the Diniacopoulos family – collectors of antiquities in an era when trade in ancient treasures was casual and poorly monitored. As, however, the artefacts in this consignment were legally authorised for export, experts at the university believe the statue is a genuine antique and that it may have come from one of the tombs of Saqqara.

Saqqara was the main cemetery for Memphis, the former political capital of Egypt, in the fertile Nile valley. It is a huge burial ground (see CWA 36) and many of the tombs are still to be investigated by archaeologists – although many have suffered the attention of tomb-robbers in both ancient and more recent times. According to Clarence Epstein, Director for Special Projects and Cultural Affairs at Concordia University: ‘The statue could have been standing for some time in one of the underground rooms or tombs there, left behind by looters. Tombs that had been opened or robbed were often used by squatters in ancient times, which may explain the graffiti.’

Dr Epstein believes the statues could be of pre-dynastic date and that the physiognomy suggests a Nubian connection: ‘Given the geography of Nubia and Egypt, there is a clear link. However, all we know for sure is that the statue was taken from Alexandria by the Diniacopoulos family – who used a photo of it on their commercial calling card. It was shipped with 20 crates of bona fide antiquities from Egypt and the Middle East. Before that, we cannot be sure – although, equally, there is no reason to doubt that it did indeed come from Saqqara, as the label stated.’

The statue is highly unusual and the university is inviting international specialists to offer their views. CWA contacted Robert Morkot of Exeter University, expert in Egyptian art, who said: ‘I have seen nothing quite like it. It is certainly atypical in having two figures facing in this way. Squatting figures do exist, and the starving figures in relief on the Unas causeway at Saqqara are an obvious link. I would say it is not Pre-dynastic but, without context, context, context, we might never know.’

Further research, including scientific analysis, is being considered by the university: ‘Communicating with the British Museum and other institutions is now our next step,’ explained Dr Epstein.