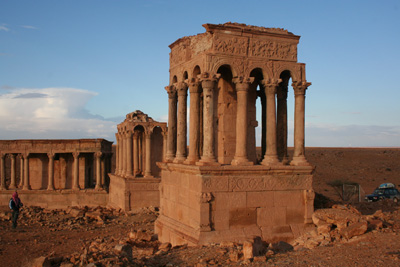 Conflict is not new to what is modern Libya. In the current struggle, the eastern half, known to us as Cyrenaica, seems to have broken away quickly and decisively from the rest of the country, which has remained under the iron grip of Gaddafi’s rule – apart, that is, from the desperate fighting taking place in Misrata and (with far less publicity) in the Jabal Nafusah region to the west. This ‘natural’ split reflects the geography of the region, one that had been respected throughout history until the territory, now understood as the sovereign state of Libya, was first united under a single colonial administration by the Italians in 1929.

The western coastal region of Libya is characterised by a relatively narrow band of cultivable hills shading off southwards into desert. It takes its name from the three coastal cities that dominated it during the Classical period. These began life as trading-posts established by Phoenician settlers. The Phoenicians, from the Syria/Lebanon coastline, were early seafarers who, according to tradition, founded Cadiz on the Atlantic coast of Spain in 1104 BC, and Carthage near modern Tunis in 814. The settlements in Tripolitania – Sabratha, Oea (pronounced ‘Wii-ya’), and Lpqy (Latinised as Lepcis) – were founded by Phoenicians or Carthaginians between the 7th and 5th centuries BC.

Initially under the domination of Carthage (to which, presumably, they paid taxes), the cities flourished when Carthage was destroyed in 146 BC by the expanding Roman state. At this time, they were nominally absorbed into the kingdom of Numidia in eastern Algeria, but in practice they must have been largely independent. A hundred years later, following the upheaval of the Roman Civil War between Julius Caesar and Pompey the Great, the Numidian kingdom was suppressed and replaced by the Roman province of Africa Nova. The coastal cities continued to thrive, even dominating the arable land of the interior to such an extent that almost no minor towns are known in the region. A milestone at the principal intersection with the coast road at Lepcis Magna records the construction in AD 15/16 of a road for a distance of 44 miles in mediterraneum – ‘into the interior’.

It has been inferred that this represented the extent of the territorium of the city, a phenomenal distance. Stone orthostats of many Roman olive farms can still be seen on the Tarhunah plateau crossed by this road. These must have been the centres of huge estates, and the largest recorded included 17 olive presses. The production of cereals and of olive oil was undoubtedly the basis of the tremendous wealth of Lepcis in the Roman period.

Visitors to the sites of Lepcis Magna and Sabratha today – both inscribed in the UNESCO list of World Heritage Sites – might be forgiven for thinking them the product of Roman colonisation. Indeed, the Italians encouraged this belief to justify their presence in Libya from 1911–1943. Yet it is clear that, unlike northerly Britain where Roman occupation brought an altogether new standard of technology and of urban life, the prosperity of the Tripolitanian cities was already well established before the Roman annexation of 46 BC.

At Sabratha, careful excavation in the 1960s enabled the reconstruction of an extraordinary funerary monument of the 2nd century BC that took the form of a slim triangular two-storey structure with a tall spire above (see left). This is derived from Punic tradition, but the architectural detail appears to take its inspiration from Hellenistic Alexandria. In the time of the emperor Augustus, Lepcis acquired a market, a theatre, and other public buildings. The recorded names of their sponsors are of Punic rather than Roman origin, and it is clear that the local magistrates were still known by their Punic titles.

The eastern part of Libya has very different terrain from the west. It is characterised by the limestone massif named Jabal Akhdar (the Green Mountain) by the Arabs, rising to some 800m and therefore capturing up to twice the rainfall that falls on any part of Tripolitania. Its appearance is very much closer to that of Crete or the west coast of Turkey. A glance at a map of the Mediterranean will show that it lies closer to the Greek world than to anything else. (Benghazi is actually closer to Athens than it is toTripoli.) It is not, therefore, surprising that the earliest historic colonisation of this coast was by Greeks. The city of Cyrene was founded, according to tradition, by islanders from Thera in theAegeanwho were led to Libyan shores by a Cretan pilot in 631 BC. They chose a wonderful site, ten miles from the sea and at a height of 600m, where plentiful springs gushed from beneath a cliff. Peaceful relations were established with the indigenous people and, before long, other settlements came into being: a port on the coast (later Apollonia) and, further to the west, Barca, Taucheira, and Euesperides (beneath modern Benghazi). As elsewhere in the Greek world, rule was initially by a dynasty of monarchs (the Battiads). These were overthrown c.440 BC in favour of a republic and the region came to be known as the Pentapolis, after its five leading cities.

The expansion of Greek settlement in Cyrenaica naturally led to ventures further west. We are told by the 5th-century BC historian Herodotus that an experimental settlement at the mouth of the River Cinyps (the Wadi Caam, 15km to the east of Lepcis Magna) was driven out by the Carthaginians. The legend of the Philaeni also relates to disputed spheres of influence between Greeks and Phoenicians in the Syrtic Gulf. According to this story, the opposing sides, tired of inconclusive conflict, decided to settle the matter by a race. Two pairs of runners were to set out simultaneously from Cyrene and from Carthage, and the agreed boundary between the territories was to be set at the point where they met. This point proved to be near the bottom of the Syrtic Gulf, about half-way between Ras Lanuf and al-Uqaylah. A glance at the map shows that the Carthaginians (reported as the Philaeni brothers: ‘lovers of fame’) had run more than three times as far as the Greeks, and they were accused of cheating. In proof of their good faith, they offered (or were challenged) to be buried alive on the spot, and so the frontier was fixed. In the 20th century when the Italians for the first time built an asphalt road along this desolate stretch, they chose to commemorate their achievement by the erection of a monumental arch, which they called the Arco dei Fileni. The arch was actually placed at Ras Lanuf, some 30km to the west of the ancient border. It stood 30m high and lauded the eternal glory of Fascist Italy. Across the top were two colossal recumbent bronze figures of the Philaeni, writhing as the soil is poured on top of them!

In later years, Cyrenaica was influenced by political developments inEgypt. The Cyreneans felt obliged to express loyalty to Alexander the Great when he visited the famous oracle of Zeus Ammon at Siwa in 331 BC, and the region then passed under the dominion of the Ptolemies at Alexandria. When Ptolemy Apion, the last of a junior line to rule inCyrenaica, died childless in 96 BC, his kingdom was bequeathed to the Senate and People of Rome.

Thus, in a sense, Tripolitania andCyrenaicacame under a single administration; but as Roman provinces they remained distinct and different. Cyrenaica stayed part of the Greek East, with Greek always the dominant language, while Tripolitania belonged to the Latin West. The space between the two was always difficult to cross before the modern era, and it was easier in both regions to travel northwards rather than east or west. The name ‘Syrtis’ (the Greater being the Gulf of Sidra and the Lesser the Gulf of Gabès off Tunisia) means a dragnet, and this treacherous stretch of coast was avoided by sailors: north winds could blow you towards the shore but there were few harbours and the coastline is lined with shallow reefs. Your vessel would therefore be wrecked and smashed upon the rocks while still a mile or more from the shore. Travel along the coast by land was barely more inviting: for long stretches, the desert, with its lack of water and its mobile dunes of sand, reaches to the very shore. A Roman army did pass this way on occasion, notably in 47 BC in the course of the Roman Civil War, when Cato the Younger, over the course of a month, marched a force of ten thousand men from Berenice (the Hellenistic and Roman successor to Euesperides) to Lepcis Magna, but this was a celebrated achievement.

After the Classical period

‘Classical’ civilization in North Africacame to an end in the 7th century AD, when Arab armies, inspired by the new teachings of the prophet Muhammad, overran a failing Byzantine administration. Thereafter, the history of the ‘Libyan’ coastline is one of competing powers inTripoli,Tunis, andCairo.Tripoli itself continued to flourish, the ancient city ofOea now taking for itself the name that had once applied to the region. But Sabratha and Lepcis faded away. Cyrenaica became ever more impoverished. The ancient cities, mostly dependent on sea transport for communications and trade, dwindled to small fishing villages or disappeared altogether. Barca, placed on a fertile inland plain, became once again important and gave its name to the region of Cyrenaica in Arabic; it has been continuously occupied ever since, though it is now a shattered remnant, following a disastrous earthquake in 1963.

In the 16th century, under pressure from the sea power of Christian Spain, the Arabs called upon the strongest available Muslim power for support, and so the Libyan regions became part of the Ottoman empire. This lasted until the beginning of the 20th century when Italy decided to claim these territories before the other great powers excluded it wholly from the carve-up ofAfrica. The Italians asserted they were rescuing the Libyans from centuries of misrule and neglect, and restoring to them the prosperity for which they had formerly been responsible. This dream (put into effect with great brutality) ended with the Second World War. After the war, the victorious Allies contemplated splitting Libya in two again, with Tripolitania returned to Italian rule and Cyrenaica annexed in some way to Egypt. It was global politics (the ‘necessity’ to keep Soviet Russia out of the Mediterranean and Russia’s insistence that it was entitled to influence in Tripolitania), not the interests of the Libyans, that finally determined the declaration of the United Nations in December 1951 that the Libya we know now should be an independent sovereign state.