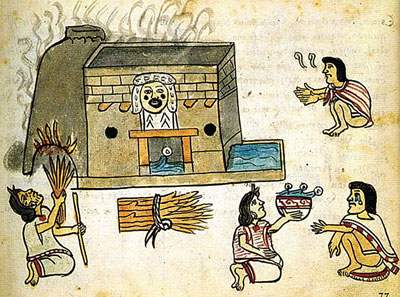 Within the rainforest-covered foothills of Belize’s Roaring Creek Valley, the Belize Valley Archaeological Reconnaissance Project has been busy investigating several significant archaeological sites. Over the past decade, our work has illuminated all manner of ancient Maya ritual practices and domestic life ways. However our most recent revelation, at Pook’s Hill, is one of the most interesting. Here we have unequivocal evidence for an ancient Maya sweatbath – one of the first of its kind in Belize.

Pook’s Hill lies just south of the modern, quaintly-named, Teakettle village and takes its name from the nearby lodge. Ceramic evidence from the site indicates that it was occupied throughout the Late Classic period, namely between AD 550 and 950. During that time, it was a medium-sized residential site of a type known as a plazuela (‘little plaza’ in Spanish). Plazuelas are domestic sites or homesteads, and would have been inhabited by extended families. In essence plazuelas can be thought of as ancient Maya villas or country manors. Such sites generally feature a small temple-like mausoleum or shrine, and several masonry platforms that at one time supported perishable thatch buildings with wattle and daub walls. The site of Pook’s Hill is composed of nine masonry buildings, including the ancestor shrine (known as Structure 4A) and our most recent discovery, the sweatbath (Structure 1B) that was tucked away in the northwestern corner of the plaza.

The term that one is likely to encounter when discussing sweatbaths in Mesoamerica is temazcal. The word is a Spanish rendition of the Nawatl term (the language of the Aztecs) temāskalli which is composed of the verb temā– ‘to cook, put something in the oven’ and kalli ‘house’. A rough translation of temās-kalli might thus be ‘cooking-house’. The ancient Maya word for ‘sweatbath’ was unknown until 1987 when epigrapher David Stuart deciphered certain glyphic passages containing the word pibnaah. The Maya term is composed of the verb pib ‘to roast underground’ and naah ‘house’, yielding the approximate translation ‘roasting-house’. These analyses suggest that the Maya and Aztec terms are of comparable meaning and reveal that sweatbaths were conceptualised as ‘oven-houses’.

Following up on Stuart’s decipherment, Stephen Houston found that this same term was used to refer to diminutive sanctuaries that originally housed the effigies of patron deities of the important site of Palenque, in Chiapas, Mexico. The term pib subsists to this day as part of the Yucatec delicacies conchinita pibil (‘oven’s piglet’), where pibil refers specifically to foodstuffs that have been roasted in a type of underground cavity. Analogously, we can think of sweatbaths as types of concealed chambers in which people steeped themselves in heat.