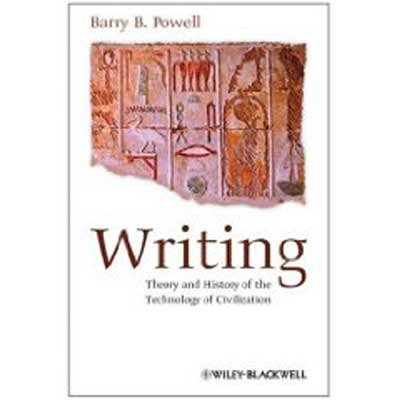 By Barry B. Powell
Wiley-Blackwell, £50.00 ‘AOCCDRNIG TO RSCHEEARCH AT CMABRIGDE UINERVTISY, IT DEOSN’T MTTAER IN WAHT OREDR THE LTTEERS IN A WROD ARE, THE OLNY IPRMOETNT TIHNG IS TAHT THE FRIST AND LSAT LTTEER BE AT THE RGHIT PCLAE.’

Thus Barry B Powell, near the end of his new book Writing, playfully reminds the reader of the complex interplay between the shape of a word and its phonetic representation.

On the book’s first page, Powell takes aim at what he regards as three long-established misunderstandings that bedevil the study of writing: that the purpose, origin, and function of writing are to represent speech; that writing originated in pictures; and that writing systems necessarily evolve over centuries of use toward more efficient phonetic representation, as in alphabets.

Egyptian hieroglyphs, for example, clearly do not fit the first claim because they do not indicate vowels. Egyptologists have to supply those when transliterating hieroglyphs to make pronounceable words in the presumed ancient Egyptian language: the pharaonic name Ramses is actually written with just three consonantal hieroglyphs that represent r, ms, and s. As to the second claim, although some of the earliest written signs (protocuneiform from the late 4th millennium BC in Mesopotamia) do look like pictures—a human head, a fish, barley, and so on—most are indeed abstract. As for evolution, one has only to contemplate Chinese writing, which became progressively less phonetic from its relatively simple origins in the Shang civilization of the 2nd millennium BC and by the 18th century consisted of almost 50,000 characters.

Although far from a textbook, Writing presents the basics of Mesopotamian cuneiform, Egyptian hieroglyphs, Chinese characters, Aegean writing systems such as Cretan Linear B, and the fiendishly complicated Mayan glyphs (which have been deciphered only in the past few decades). The most important chapters concern West Semitic writing from the Near East (such as the Phoenician script) and the Greek alphabet, Powell’s special field as a classicist. He is best known for his provocative thesis (published in Homer and the Origin of the Greek Alphabet in 1991) that the Greek alphabet was invented c.800 BC by one man, in order to write down oral epic poetry, notably Homer’s.

Here Powell strongly argues against another popular view: that to create their alphabet, the ancient Greeks borrowed the Phoenician script, which has only consonantal letters, and added to it letters for the Greek vowels. He notes, ‘It is inaccurate to say that the inventor of the Greek alphabet ‘added vowels’ to a previously vowelless script, when the concept ‘vowel’ depends on how the Greek alphabet functions and not on objective features of human speech.’ Spectrograms of ordinary speech do not distinguish vowels from consonants: there is a continuous wave. The letters of the alphabet are what give us the compelling idea that speech can be atomized into particles of sound. Nor are words the discrete acoustic entities we like to think. Powell reminds us that when the classicist Milman Parry (in his famous 1930s studies) asked illiterate Balkan singers to sing just one ‘word’ of their songs, they would deliver an entire line, several lines, or even a complete song.

On the origins of writing in Mesopotamia, Powell takes pains to distinguish what he calls semasiography from lexigraphy. In semasiography (such as petroglyphs, protocuneiform, airport signage, and mathematical notation), the signs are not attached to necessary forms of speech, whereas in lexigraphy (such as cuneiform or the alphabet), they are. No one really knows how semasiography gave rise to lexigraphy. Powell favours Denise Schmandt-Besserat’s theory, published in 1992 in her book Before Writing, that the semasiographic clay ‘tokens’ found in large numbers in Mesopotamian sites from about 8000 BC until the emergence of protocuneiform c.3300 BC were instrumental precursors of lexigraphy. He incorrectly suggests, however, that the tokens ‘gradually disappear’ c.3400 BC, whereas, as Schmandt-Besserat admits, they continue until 1500 BC, long after the emergence of lexigraphy. Rather than precursors, the intriguing tokens are more likely to have been a parallel system of accounting that tells us nothing definite about the emergence of writing.

The book is, in places, partial and contentious, with a number of unsubstantiated assertions—such as its misrepresentation, following Maurice Pope in The Story of Decipherment, of the scientist Thomas Young’s crucial contributions to Jean-François Champollion’s decipherment of Egyptian hieroglyphs. Surprisingly, Powell does not mention John DeFrancis’s comparable book, Visible Speech: The Diverse Oneness of Writing Systems, which has the advantage of being written by a Chinese specialist. No doubt Powell is right to generalise that ‘The Chinese will learn to use the alphabet, but alphabet users will not learn to use Chinese’ because of its bewildering signary. But he goes too far in his undervaluing of the important role, emphasised by DeFrancis, of phoneticism in reading and writing Chinese characters. Despite these shortcomings, Writing is stimulating and impressive (if too densely written for the nonspecialist), a worthy successor to the pioneering book by Semitic specialist I J Gelb, A Study of Writing, first published more than half a century ago.

Reviewed by Andrew Robinson, the author of Lost Languages: The Enigma of the World’s Undeciphered Scripts, and of a biography of Thomas Young, The Last Man Who Knew Everything.