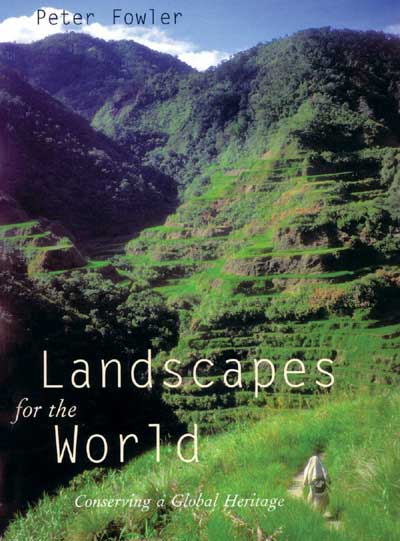 The system of World Heritage Sites has been one of the great successes of UNESCO. Everyone seems to be in favour of them: local inhabitants and national governments alike see a World Heritage Site as adding enormously to their prestige. Tourist organisations love them for providing a cast iron reason for including them on their itineraries; and bureaucrats love them most of all, because it enables them to extend their bureaucracy enormously with management plans, pushing out the previous stakeholders and managing the sites in the interests of the local politicians and perhaps even the tourists.
There are in fact three types of World Heritage Sites. There are the Cultural Properties, the best known, of which there are 582. Then there are the Natural Properties, of which there are 149; and finally there is a third category, a rag bag of mixed cultural and natural properties known as Cultural Landscapes, of which there are 36. This is now the subject of an outstanding book Landscapes for the World by Peter Fowler, the former Professor of Archaeology at Newcastle (Windgather Press, price £18.99).
What is a Cultural Landscape? There is perhaps a certain confusion in the concept, well shown by the two World Heritage Cultural Landscapes sites in Britain: the Blaenavon Coal Mine in South Wales, and Kew Gardens in London: what do they have in common?
Peter Fowler, one of our foremost landscape archaeologists, has become one of the principal proponents of the concept of Cultural Landscapes and has been an assessor to UNESCO on selecting them. Consequently, the most fascinating part of the book is his description of some of the politicking that goes on behind the scenes. For instance, why not make the whole of the Loire Valley a Cultural Landscape with its superb selection of Chateaux? There was one major objection: hidden away in the middle of the area is a redundant atomic power station, and on account of this it was referred back. The following year it crept in by the back door, by the device of omitting the atomic power station, leaving it marooned, as it were, as an island in the middle of an otherwise pristine cultural landscape.
The strength of the book lies in the chapters in which he describes many of the sites – or at least those with which he was concerned, and gives the arguments for and against the inclusions. A particularly fascinating chapter is that entitled ‘Contentious landscapes’ in which he describes some of the sites that proved most problematic (why not include the Derwent Valley?)
I still think that Peter Fowler, for all his obvious enthusiasm, is slightly ambivalent about the whole concept and this ambivalence gives the book its savour. But perhaps the greatest value of the book is that by studying intensively perhaps 3% of the total of World Heritage sites, one may perhaps learn a lot about the other 97%. The value of the book extends well beyond its study of Cultural Landscapes per se, and anyone seeking the background to the World Heritage phenomenon will find this an excellent introduction