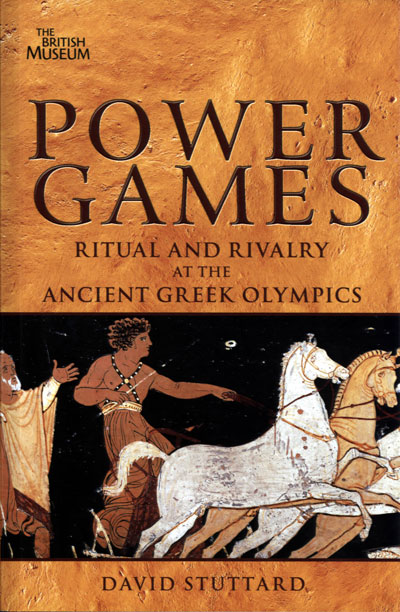 They had come to the hilltop to make sacrifice. Now, on this day of days when the world was balanced between light and darkness, the king-priests of Elis had climbed the wooded slopes above Olympia to make their offerings to Kronos, one of the most primeval and terrifying of their gods. Legend told how, to preserve his power, Kronos had eaten his newborn children one by one…’.

Thus does David Stuttard open this splendid little book on the ancient Olympic Games of 416 BC. Superbly structured and elegantly written, the book is a vehicle for Stuttard’s intimate feel for the fabric of the ancient world, with all its customs, quirks, neuroses, and prejudices.

He has, in particular, a profound understanding of the myths and rituals of Ancient Greece, and the book is an imaginative and vivid reconstruction, based on fragments of evidence from literature, art, and buried artefact, of what it might actually have been like to have been there 2,500 years ago.

Stuttard dispenses with the academic apparatus of exegesis, argument, and notes. Rightly so: this is a work for the general reader, and those who wish to search the scholarly literature are free to do so. In places where there is doubt, this means plumping for an interpretation and presenting it as if certain. Fair enough: Stuttard knows his stuff, and his judgement is as good as anyone’s. I found virtually nothing to quibble over.

What I did find were many nuggets of fresh insight and imagery. How about this description of a chariot race from Euripides? ‘The wheel-rim caught against a rock, and it buckled, throwing him [Hippolytus] to the ground. It was all confusion. Hubs of wheels and lynchpins spiralled through the air, while he himself, poor man, was dragged along the ground, caught in the entanglement of reins which he could not escape from, cracking his head against the rocks, ripping his flesh…’.

I had not read that one before, nor seen the image that appears on the facing page, where a black-figure charioteer can be seen crouching low over the reins as a rival team pushes him hard.

David Stuttard is a classicist well-known for translating and directing Greek plays (he is closely associated with the touring company Actors of Dionysus), and for his teaching and writing on the subject of Greek drama. He has recently published books on other classical subjects, including, in collaboration with the British Museum’s Sam Moorhead, AD 410: the year that shook Rome, The Romans Who Shaped Britain, and (reviewed opposite) 31 BC: Antony, Cleopatra, and the fall of Egypt. His career represents an admirable commitment to popularising classical culture and making it accessible to new non-specialist audiences.

Power Games is a fine example of that. It is centred on 416 BC because that is the year in which rich Athenian playboy and political opportunist Alcibiades (if it helps, try to imagine some ghastly hybrid of Richard Branson and Tony Blair, but 25 years younger) entered seven teams in the four-horse chariot race. All part, as Stuttard explains, of his relentless pursuit of celebrity and self-advancement, and a fine illustration of the plotting and intrigue with which the Games were saturated.

The Greeks knew this, of course. The Olympics were a sporting spectacle, a succession of ritual performances, and a veritable sex-fest. But they were also deeply political events to be manipulated by self-interested elites – just like today. The London 2012 Olympics, with its corporate sponsorship and ‘open for business’ message, is simply the modern equivalent of Alcibiades’ brainwash intervention of 416 BC.

Stuttard’s account of the Olympics in their classical heyday has it all, and is warmly recommended.