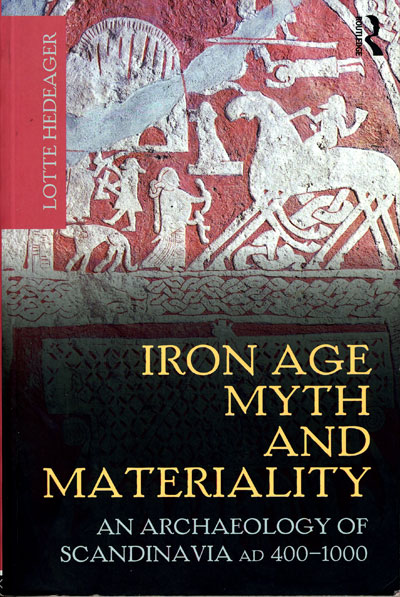 The main challenge of studying pre-Christian Scandinavia is that written sources describing the period mainly post-date the region’s official conversion by centuries. Written by Christian scholars who no longer share the beliefs of the ancestors they describe, most are also decidedly literary – sagas, poetry, and mythological narratives. A pessimist might dismiss the whole corpus as being of little historical worth, but Lotte Hedeager, Professor of Archaeology at the University of Oslo, believes that Old Norse writings can be rehabilitated as historical sources and – with careful and critical reading – complement archaeological evidence to help us to explore this remote society ‘from the inside’.
Reconciling Iron Age archaeology with Medieval writings is no mean feat, but Hedeager rises to the task with obvious enthusiasm, launching into a brilliantly interdisciplinary survey of Scandinavia’s pagan past that weaves together literary, linguistic, and archaeological evidence. Detailed monochrome drawings of artefacts accompany this analysis, and any reader inspired to follow up a topic is spoiled for choice, since every passage is liberally sprinkled with references to other authors (whose works are listed in a generous 33-page bibliography).
But it is the final three chapters, where Hedeager highlights radical changes in Scandinavian material culture beginning in  the 5th century, that are the most interesting. The catalyst for this, she proposes, was invasion by an outside force: the Huns. Appearing in the Black Sea Region in the late 4th century, Hedeager suggests that they also reached Scandinavia, pointing to characteristic jewellery found in Denmark  and southern Norway, and the numerous mentions of Huns in Old Norse literature.  Her arguments for cultural contact are persuasive, though some of her conclusions – notably that the god Odin was based on the notorious Hunnic leader Attila – are somewhat startling. Overall, however, this section raises intriguing questions that certainly deserve further consideration.