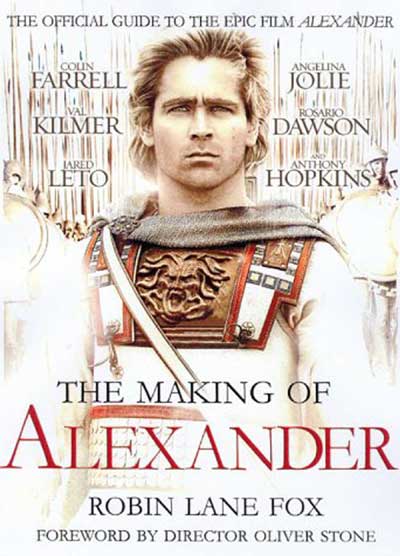 Oliver Stone’s new epic Alexander has hit the headlines. The New York Post has labelled it ‘Alexander the Gay’, and US Christians thinking of going to see it have been advised to ‘speak to your pastors immediately because Satan is attempting to enter your mind’.
Greek nationalists have been fuming. How could the greatest hero in their history be bisexual? What ancient source describes Alexander and Hephaistion making love? It is a modern slur concocted by Hollywood’s politically correct glitterati.
The film critics have panned it. ‘Not just a bad movie, but a bad movie of truly epic proportions.’ ‘You know a Hollywood spectacle is in trouble when its hero yearns to go forward, but his soldiers just want to go home – and the audience sides with the weary mutineers.’ ‘Alexander is full of brilliant highlights, and they’re all in Colin Farrell’s hair.’ ‘In the marital bed, Farrell hisses and bears his fangs like a jungle cat. I didn’t know where to look.’
Are the attacks justified? It is worth investigating. After all, Alexander is one of the central figures of world history, and his cultural impact in the 2,300 years since his death has been immense. Any attempt to turn this chunk of ancient history into three hours of Hollywood epic – and present it to an audience of millions – involves a fascinating engagement between cinematic entertainment, historical interpretation and archaeological evidence.
The movie’s director certainly took it all very seriously. The Vietnam war veteran who had made such classics as Platoon and Born on the Fourth of July hoped it would be ‘the greatest masterpiece of my life’. He hired Oxford ancient historian Robin Lane Fox, author of a brilliant biography of Alexander published in 1973, as his historical consultant. (His fee was to be allowed to participate in a series of cavalry charges: ‘Oliver, you know I’ve just done the one thing I wanted most of all to do in my entire life … I can never thank you enough.’)
Lane Fox remains a firm supporter of the film. He is refreshingly free of academic stuffiness. One would expect an Oxford don to be moaning on about how they had got everything wrong. The mutiny against marching further east came after, not before, the battle of Jhelum. The battle was fought on a plain, not in the jungle. Alexander was not wounded there, but months later attacking a walled town. It is easy to imagine the historical consultant, marginalised and embittered, eventually stomping off indignantly back to Oxford.
In fact, the big, brash, mega-bucks Hollywood director and the gangly fox-hunting English don hit it off straightaway when they first met in spring 2002. ‘Be sure you understand,’ Stone insisted, ‘we’re not making a history book. This isn’t a documentary. It’s a dramatisation, though it should take history as its starting point. There’ll have to be compromises, because of time, money, drama and space.’ Lane Fox willingly embraced the demands of film, adapting his historian’s craft to them, and became deeply implicated in the whole production. His defence of the result is robust.
Stone had warned that straight history would ‘have emptied the cinema in seven minutes flat’. To create a human drama that makes sense, to present characters and conflicts that engage the emotions of an audience, and to fit it all into a budget and three hours’ viewing, you have to compress time, conflate characters, even alter chronology. ‘If the interpretation is putting the events into the wrong sequences,’ explains Lane Fox, ‘it will not be historical; it may, however, be dramatic.’ It may, moreover, make it possible to communicate a deeper truth – to present a distilled ‘essence’ of the historical Alexander.

For more on the background to the film, Robin Lane Fox’s The Making of Alexander, (R&L, £11.95) can be recommended.