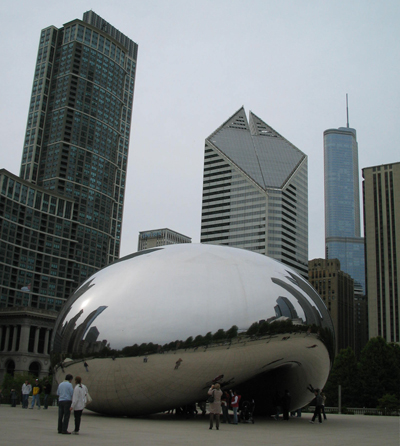 Chicago is a very European city. With the wind whipping up Lake Michigan, it feels like Geneva on an autumnal day until you look back to the forest of extraordinary skyscrapers that make up the heart of this city. More European still are the elegantly tended flower beds that line the main streets, and belong to a green city that is tended with care. Chicago expresses a sense of ambition and plainly seeks to compete with New York. Nowhere is this more evident than the new Millennium Park which features an iconic Frank Gehry building completed in 2004 – the Jay Pritzker Pavilion, home of the city’s Grant Park Orchestra.

This European ethos even extends to one of its greatest skyscrapers – the 1925 neo-gothic Chicago Tribune building, with stones from many great places – Notre Dame, Pompeii, the Great Pyramid, and the Great Wall of China among them – meshed like spolia into its fabric. Finally, like any great European city, Chicago has many fine museums. The most striking, perched on the periphery of the Millennium Park, is the newly enlarged Art Institute, with its minimalist new extension designed by Renzo Piano, that more than doubles the gallery spaces of the adjacent classical building. Sitting in the new café of the Art Institute, it feels like being in Sweden or Switzerland rather than in the heart of the commodities-driven market-place of the USA. Piano’s new building brings grace and light to the art and main halls, and lacking pretension, its clean lines blend well into the city of tall towers.

The Director of the Art Institute is James Cuno, a soft spoken academic whose latest book, Who Owns Antiquity? (Princeton 2009) has been a controversial contribution to the thorny issues of cultural patrimony. Cuno essentially argues for a return to the kind of globalised traffic in antiquities that existed in the later 19th and early 20th centuries, when partage – the system of sharing finds from archaeological excavations – led to American museums as well as major European museums amassing great collections from provenanced digs. Cuno’s sub-text is a criticism of modern archaeologists who have cultivated a nationalist approach to excavation practice, causing the end of the partage system. As a result, American museums have looked for other sources to enlarge their collections of antiquities, unwittingly creating the unpalatable rise in subsistence looting in many countries.

Cuno, it must be stressed, is seeking to enhance museum collections and to eliminate looting, but whether his solution works, is open to question (as he genially acknowledges). What strikes me about this engaging director, however, is that he has the blueprint of Renzo Piano’s masterplan in his office – effectively a model shrine to the highly successful marketing of contemporary art with minimalist information for the visiting public. And yet his academic interests, as is evident in Who owns Antiquity? and from his current research into the Encyclopedic Museum, take an altogether different direction. Without doubt, whether you agree with him or not, he is attempting to define what in the past made great archaeological museums such powerful temples to world culture, rivaling the status of latter-day art museums. Today, with a few notable exceptions, the difference between archaeological (with anthropological) and art museums is often the difference between generations or, to put it baldly, between the stuffy and old fashioned, and the cool.