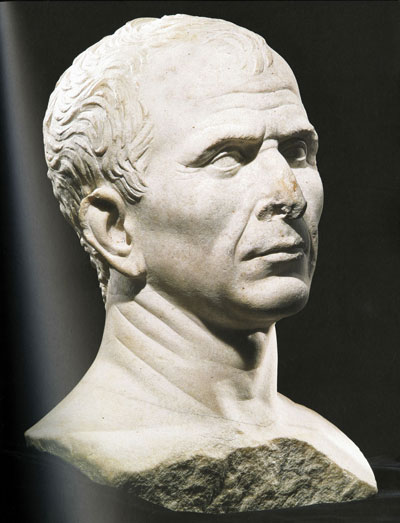 Not many archaeologists can claim to have uncovered a face from the ancient past – and immediately recognised it. Luc Long, director of the Rhône Underwater Archaeology Project at Arles, is one of the few. The marble bust that gazed from the murky waters of the Rhône in the autumn of 2007 looked so familiar that he immediately exclaimed: ‘Mais, c’est César’. He was right.

A programme of detailed comparison with other portraits of Caesar, notably that discovered in Tusculum in 1825 and now in the Archaeological Museum in Turin, confirms the identification. Both were carved by first class Roman sculptors, and show the great dictator aged in his fifties. The sharp, intelligent face is furrowed by experience. The high forehead, the widow’s peak, sensitive mouth and prominent Adam’s apple distinguish one of the few recognisable faces from the ancient world – a limited gallery that includes Nefertiti, Akenhaten, Cicero and perhaps Alexander the Great with whom Plutarch paired Julius Caesar. Prior to photography, millions of human beings retained their anonymity. Even the illustrious were botoxed into blandness by artists with no interest in accurate representation. Caesar is one of only a handful that escaped the indifference of posterity.

Caesar’s was a face that launched not only a thousand ships but legions of troops across Europe. The Warren Beatty of his day, Caesar’s men took a jocular pride in his pulling power, even if they sometimes implied it was utilised to attract members of his own sex. But that was part of Caesar’s ruthlessness; no rung was too slippery if it might help him scale the ladder of power and wealth. A couple of years before his assassination in 44 BC, Caesar wrote: ‘I have lived long enough for either nature or glory’. He did not suffer from false modesty and would not be surprised to see his own image again dominating the streets of Arles. For he is the poster boy of a major exhibition at the Musée Départemental de l’Arles Antique entitled César: Le Rhône pour Mémoire that highlights the results of 20 years of excavations in the river at Arles. Curated by Luc Long and Pascale Picard, it demonstrates the vibrancy of the town where Caesar established a colony in 46 BC.