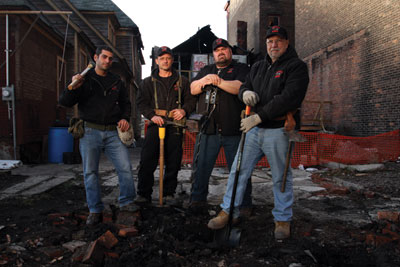 Both Diggers on the National Geographic Channel and Spike TV’s American Digger follow the exploits of metal-detecting teams as they search for buried artefacts. Both productions depict the frequent and careless removal of antiquities, with the sole objective to collect treasure for monetary gain.

Archaeologists have angrily denounced the series as a promotion of mercenary treasure hunting with a disregard for any scientific protocols, context or recording. Particular concern was placed on the blatant commercialisation of the artefacts, where a price tag is put on all the unearthed objects.

Dr Elizabeth Bartman at the Archaeological Institute of America (AIA) raises some serious ethical questions: ‘Attaching a monetary value to the uncovered object promotes the idea that a society’s heritage can be exploited for profit. Linking artefacts to monetary values will encourage people to engage in digging, legal or illegal, in the hopes that they can strike it rich.’

The debut episode of National Geographic Channel’s Diggers has been the focus of much criticism from academic circles. The show features two metal detectorists searching for artefacts in Montana, with one of the characters exclaiming: ‘If it’s in the ground, it’s coming out.’ A storm of protest has developed after footage from the episode captured the apparent infringement of state law. Filming for Diggers took place at the state-owned Montana Territorial Prison, which is listed on the National Register of Historic Places and requires a permit to dig at the site. State Archaeologist Stan Wilmoth confirms the possible criminal charges: ‘No application was received or approved. We believe the show documents a violation of the Antiquities Act.’ These charges have been strongly refuted by the channel.

National Geographic has been accused of undermining its long-time support for serious scientific investigation through the commissioning and promotion of Diggers. Wilmoth argues that the series encourages potentially illegal treasure hunting, noting that ‘the public’s heritage is diminished any time private amateurs remove artefacts from heritage sites. The fact that these shows glorify the intent to sale the artefacts is really an added insult to the public’s injury’. Following petitions and a vociferous online campaign, National Geographic Channel has not ordered any more episodes of the show. Chris Albert, Senior Vice President of Communications, says the channel is now exploring how to take ‘more of an advantage of the archaeology community’s insights and expertise with programmes of this type.’ In stark comparison, Spike TV’s American Digger has garnered similar protests but the reality show has proved to be a veritable hit with the public, drawing a regular audience of nearly 1.5 million people.

Savage defence
The star of American Digger is Ric Savage, a former professional wrestler turned treasure hunter. Savage concedes that no archaeological procedures are followed in the series but he defends the show, emphasising that all the artefacts are dug from private property with prior permission: ‘There is not an archaeologist in the world that would bother to dig on a suburban property. Many of these properties are being built on, and the artefacts are lost anyway. Urban sprawl and massive development is the major problem – not metal detecting.’

The series has drawn fierce fire from the metal-detecting community, and Savage has now been cancelled as a columnist in American Digger Magazine, which has no connection to the show. Publisher Butch Holcombe says: ‘We were appalled at the focus on values, the awful excavation methods, and the bravado of the stars. We recognise it is for entertainment purposes, but it is not representative of the detecting hobby as a whole.’ Ironically, Holcombe claims the series has brought metal-detecting hobbyists and the archaeological community together, ‘as both generally hate the get-rich concept and lack of historical focus’, he says. Both series have particular resonance following the recent conviction of a man for looting more than 9,000 Civil War era artefacts from the Petersburg National Battlefield Park over a four-year campaign. Dr Bartman at the AIA believes that the loss of historical context from metal detecting is particularly damaging: ‘What is especially sad is that archaeology, when conducted professionally by trained persons who carefully document what they unearth, is incredibly exciting and of interest to the general public. You don’t have to have an Ivy League degree to want to learn about how our ancestors lived and died.’