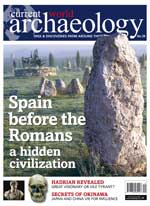 What was Spain like before the Romans? The site of Pintia, in north central Spain, is providing surprising answers. From the 5th century BC until the arrival of the Romans in the 1st century BC, Pintia was occupied by the Vaccaei, an Iron Age people with Celtic links. Alas, the Vaccaei left no written history and, with the passage of time, their memory fell into legend and obscurity. However, current excavations at pre-Roman Pintia are revealing a sophisticated city, replete with gridded streets, an artisans’ quarter, and an unexpectedly rich cemetery.

Thereafter, we cross the globe to Okinawa. The island lies just 300 miles south of Japan and 400 miles from China. It is, therefore, in a classic crossroads situation. How far did it show influence from Japan, and how far was it swayed by China? A recent conference provided the opportunity to see the hidden treasures of Okinawa, and those of its fellow sub-tropical Ryukyu islands.

Moving further south, we reveal yet more concealed gems. While the great rock art of Europe and Africa is justly famed, Southeast Asia has almost as much rock art as is known from Europe and Africa combined. Here we take a look at the intriguing rock art from China, Malaysia, Myanmar, Indonesia and Australia.

Back in Europe, the next major exhibition at the British Museum will be devoted to the emperor Hadrian. His reign marked a turning-point in Roman history. Though brilliant and visionary, he died embittered by failure. Why? Here, as an adjunct to the new exhibition, Neil Faulkner tells of the life and times of Hadrian.

Finally, there are all the usuals: World News, Diary, Listings, a postcard from Richard Hodges, and a column from the inexhaustible Brian Fagan whose latest book, The Great Warming: The Rise and Fall of Civilizations, has been climbing the heights of the US bestselling book list. The magazine ends in paradise with a backpage visit to the balmy Pacific island of Palau.

Kingdom of the Coral Seas:

New discoveries from Okinawa and the Ryukyu Archipelago
JAPAN Latest finds from the Ryukyu islands, including a series of royal burials.

Pintia: fortunes of a pre-Roman city in Hispania

SPAIN Once a thriving Iron Age settlement, the city and its necropolis is now offering a wealth of evidence about the elusive Vaccaei people.

ROME Though a brilliant emperor, Hadrian died disillusioned, embittered and a recluse. Here Neil Faulkner presents a portrait of Hadrian from his new book   Rome: empire of the eagles.

Illustrating the past: the rock art of Southeast Asia

SOUTEAST ASIA The gamut of rock art from Australia, Indonesia, Malaysia, Myanmar (Burma) and China is explored as part of a new initiative to investigate this rich store of material.

Nadia Durrani tours the Southeastern corner of Turkey and visits the site of GÃ¶bekli Tepe, an 11,000 year old site that is so incredible it is changing our view of human history.

Scott M Fitzpatrick takes us to one