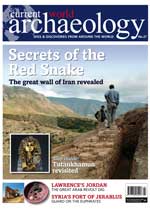 The ‘Red Snake’, or Gorgan Wall, of northern Iran is one of the world’s greatest frontiers.   But who built it? And when?   An international team of archaeologists has been at work and here they finally unravel the secrets — and the date — of the Red Snake.
In the Euphrates valley, towns and palaces are well known, forts less so. Jerablus, a small but strong fort dating to the Early Bronze Age, was an outpost of the Biblical site of Carchemish. After the First World War, the archaeology was rendered largely inaccessible since it lay on the new border between Syria and Turkey. However, recent rescue excavations on the Syrian side of the boundary have revealed a small fortified village and one of the richest Early Bronze Age tombs yet known in the area.
T.E. Lawrence, later Lawrence of Arabia, excavated at Carchemish before the First World War. Coming full circle, he also lies behind the Current World Archaeology-backed dig. The team has been digging South Jordanian sites of T.E. Lawrence’s war against the Turks. Here they present the latest results, which are extraordinary and chilling.
This winter, Tutankhamun returned to London in a widely publicised exhibition. But how does this block-buster compare to the famous 1972 British Museum exhibition? Philip Taverner, who as Marketing Manager for Times Newspapers helped set up the first exhibition, gives us his unique perspective on the new show, and remembers the excitement of the original exhibition.
Thereafter, Brian Fagan looks at hidden rock art from Alaska; while Richard Hodges, newly ensconced as the director of the University of Pennsylvania Museum, remembers his first heady encounter with the Museum.
We then offer all the usuals: news, books, letters, and diary. The magazine ends with St John Simpson, of the British Museum, who takes us on a back-page tour of the spectacular sie of Nemrut Dag in Turkey.

The enigma of the ‘Red Snake’
IRAN The story of the red-brick Gorgan Wall. Snaking at least 195km from the Caspian Sea to the Highlands, it is one of the worlds greatest frontier walls.

Jerablus and the land of Carchemish
SYRIA The tell site of Jerablus Tahtani, which rises up in the Uruk period, becomes a strongly fortified site in the Early Bronze Age, but is abandoned around 2,300 BC.

Lawrence’s Jordan
JORDAN The Great Arab Revolt Project, the CWA-backed excavation, is in its second season. Here the team tells of the latest results.

Tutankhamun and the golden age of
the Pharaohs
EXHIBITION Philip Taverner, who, as Marketing Manager for Times Newspapers, helped set up the 1972 British Museum Tutankhamun exhibition, reviews the new 02 exhibition and remembers the original exhibition.

Diary
Last splash drive to save the Roman site of Allianoi in Turkey.

On site insights
Nemrut Dag, Turkey The 1st century BC site of the local dynast, Antiochus I, who ruled a small but wealthy kingdom in south-east Turkey called Commagene.