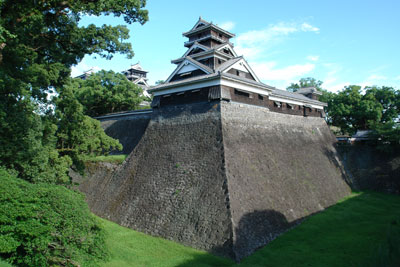 Japanese castle keeps are fantastic creations of white wood and blue tiles ornamented with gold, and look more like the fairytale illustrations of a child’s storybook than a fortress or stronghold. They sit perched high on formidable plain stone walls – the only means of comparison with, to use Shakespeare’s words, the ‘worm-eaten hold of ragged stone’ that characterises the typical European castle.

Yet appearances can be misleading, and the first common mistake made by a visitor to a Japanese castle is to assume that nothing is missing. Anyone used to visiting ruined European castles, where cold winds howl through open towers, may be forgiven for thinking that the striking appearance of a Japanese castle means that the edifice has survived in an almost intact state. Yet this is usually not the case. The famous multi-storeyed keeps of castles such as Himeji or Kumomoto represent the survival of just one small part of what was once an enormous defensive complex.

Taken as a whole, Japanese castles are often as ruined as European ones, because, being built predominantly of wood, they are no strangers to repeated destruction, demolition, and rebuilding. Fire, earthquakes, and tsunami have all taken their toll through the centuries; and so has war, although the demands of peace have tended to exert a stronger influence on the likely survival and appearance of most of today’s castles. When Japan entered the modern world in 1868, no place was found for the ancient castles, and demolishing them sent a local message of loyalty to the new regime.

Sendai Castle was once one of these glorious creations. Its massive stone bases survive, but little is left of the ornate superstructure that marked the administrative centre. It was built in 1600 by Date Masamune (1566-1636), who became the first lord, or daimyo, of the Sendai Domain at the beginning of the Edo period, when Japan was reunified under the first Tokugawa Shogun. It was Tokugawa Ieyasu who moved the capital of Japan to Edo, modern-day Tokyo (meaning ‘Eastern Capital’), although the Emperor continued to reside in Kyoto until the restoration of Imperial power in the 1860s.