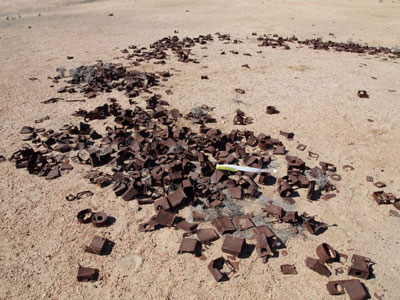 A forgotten WWI battlefield lies in Africa’s Namib Desert. Few historical accounts exist of the campaigns fought here, so James Stejskal and John Kinahan look to the archaeological record for evidence of conflicts that helped change the course of world history.

The Namib Desert of south-western Africa is the oldest in the world. It is here that one of the more distant – and now almost forgotten – theatres of conflict was played out during the First World War. The desert has a harsh beauty: it displays a vivid palette of pastel hues in the cool, sometimes near freezing, temperatures of the morning. Later in the day, the picture is quite different: the sun washes out all but the drabbest of colours, while dust and sand are blown about in the searing heat.

It is an area that is often overlooked when thinking of the Great War, yet the 1914-1915 battle fought here changed the destiny of the colony that was then known as German Southwest Africa (GSWA). The battle was one of the first in the military campaigns that would eventually strip Germany of its colonies. German colonial troops faced the Allied forces of Britain, the Union of South Africa, and the British colony of Southern Rhodesia. After a series of short but intense engagements and a drawn-out rearguard action, German Southwest Africa (GSWA) fell to the old Boer commander, General Louis Botha.

Spend just a day in the region, and you will understand the monumental difficulties both protagonists endured to undertake military operations in this area. The South Africans were attempting to feed and water several thousand horses where little fodder existed, and after the Germans had sabotaged many of the water points. Existing accounts of the campaign from both sides often dwell more on those difficulties than on the dangers posed by their enemies in battle.

Although small in scale when compared to the epic battles of the Western Front, the campaign in GSWA was nevertheless pivotal, as it stripped Germany of her most prized African possession, and proved an important milestone in the history of the country that would eventually become Namibia. Documentary accounts of the campaign lack detail of the actual sites involved, and it is only through archaeological field survey that the course of events can be securely placed in the landscape.

At the beginning of World War I, Britain requested that its Dominion ally, the Union of South Africa, take on the task of eliminating German Southwest Africa as a threat to the Empire. Specifically, London was concerned with the huge radio station at Windhoek that was key to German naval and commercial maritime communications. Botha was happy to comply – he had already considered the benefits of annexing the territory to South Africa. Shortly after the surrender of the Germans in July 1915, South Africa occupied the colony and declared it a ‘protectorate’, thus beginning a new and difficult epoch in Namibia’s history.

The critical engagements of this campaign took place in the mostly dry Swakop River valley, a narrow ribbon of green that meanders through the Namib Desert. The battlefields of Riet, Pforte, Jakalswater, and Trekkopje are some of the least disturbed in sub-Saharan Africa. The biggest threat comes from the increasing encroachment of uranium exploration and mining companies who have licensed access to the area. Detailed archaeological surveys form part of the environmental compliance requirements for prospecting and mining in Namibia. The Namib Desert Archaeological Survey has carried out more than 150 field surveys, and documented more than 2,000 previously unknown sites, working closely with both mining companies and the Namibian heritage authorities to mitigate the negative impact of modern development.

The Namib Battlefield Historical Survey began to investigate the area in 2011, and aims specifically to document the battlefield sites as part of Namibia’s cultural heritage. Our first steps were to review the relevant historical documentation to understand the timeline and the movements related to the campaign, and then begin surveys of each site. Thus far, we have surveyed and conducted preliminary mapping and reconnaissance of the Allied camp at Husab, which was the jumping-off point for the subsequent battles at Pforte, Riet, and Jakalswater; these three battlefields themselves; and a fourth at Trekkopje.

There is little disturbance in the area while we work, other than the occasional mining vehicle that rumbles through. Much more common are the springbok, ostrich, and endangered Hartmann’s mountain zebra that wander about curiously, but cautiously, eyeing the intruders in their realm.

Already, our initial focus on Botha’s camp at Husab has rewarded us with interesting revelations about the South African advance. Our first investigative survey located and documented 23 tent rings (there should be many more, as about 7,000 troops camped briefly at this point); ten defensive breastwork positions (sangars) on the camp’s perimeter and several probable logistics points for the dispersal of ammunition and other supplies; a probable command post; and many trash dumps containing rusted bully beef, fish, and biscuit tins, as well as bottles, wire, and a few expended rifle cartridges.

Wire anchors tied to rocks characterise the tent rings. Interestingly, there was no evidence of post-holes, suggesting either that they were not used or that posts were not set in the ground. Indeed, it is possible that the tent anchors – wire toggle-and-loop devices – were intended to allow the tents to be instantly collapsed in the event of German attack. The Germans were not to be underestimated, and this site provides a glimpse into some of Botha’s tactical concerns. As it was, the Germans had entrenched themselves a day’s march to the east, in an easily defensible bottleneck at Riet, which lay on the approach to their main positions at Jakalswater.